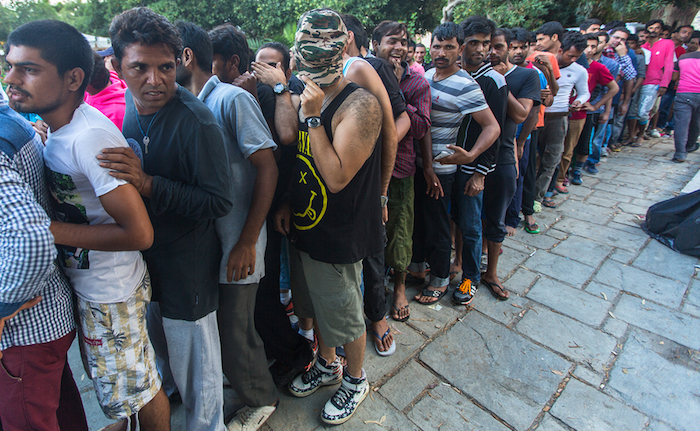 Although, the 1,200 new residents reflect only 25% of the population of the town, that’s quite enough to completely destroy the small, picturesque German town of Boostedt and turn it into an Arab ghetto:

The mayor and the residents of Boostedt are increasingly worried about how migrants are affecting their hometown. In the last three years, around 1,200 migrants were settled in the town’s military barracks, which is a 26 per cent population increase.

Hartmut König, the mayor of the town with 4,600 inhabitants, tells German broadcaster NDR in an interview how admitting so many migrants has had a negative impact on the town.

“It’s quite simply the behaviour. For example, in shops things are stolen. I experienced it myself: three refugees walking on the pavement, not making enough room for a woman with a pushchair and a child coming in their direction. They make no room; she has to move onto the street to get around them,” the mayor says.

“That’s just one incident, but it shows the entire picture. Besides that, they leave piles of rubbish and use every available space to sit around and drink beer,” he adds.

While broadcaster NDR attempts to minimise the issues, saying that these migrants are mostly young men with little chance of permanent residency in Germany, residents share their worries in front of the camera.

“Helping makes sense, it’s our ecclesiastical obligation, but the way things are going — that these people are being left to themselves, walking around, sitting everywhere in the city; no one recognises our city anymore — Boostedt used to be a beautiful place,” an elderly man says.

Thousands of years ago, most of the Middle East was a flourishing White civilization, but once the surrounding Arab populations started moving in, that entire region was eventually reduced to what it is today — an impoverished and backward desert.  That is what awaits Europe if and when history repeats itself.

Not only will the German cities be ghettoized, but so will the German gene pool, and if nothing is done to stop it, the Germans will wake up in a couple generations and find themselves to be Arabs.  After all, the word “Arab” is derived from the ancient Hebrew word “ereb” which means “to mix” and become dark — a “mongrel” race. That’s exactly what is happening to Europe — it is becoming dark, but this darkness will make the Dark Ages look like the so-called Enlightenment.