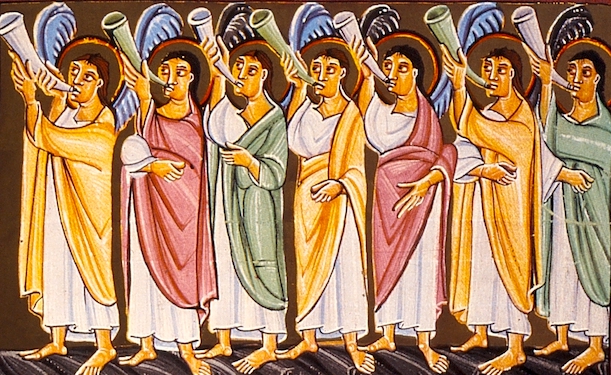 In his landmark 1902 book, Judah’s Sceptre And Joseph’s Birthright, J.H. Allen describes a remarkable discovery by a farmer in Denmark in the mid-17th century:

It is now more than two hundred and fifty years since a Danish peasant who, with his daughter, was following their plow in their native country, when the daughter’s plow turned up a bright and glittering something, which upon examination proved to be a golden trumpet.

It was taken to the authorities, and beyond all doubt, identified as one of the Seven Golden Trumpets used in the altar service of the Temple at Jerusalem.

This trumpet, which is now in the National Museum at Copenhagen, is ornamented with a lily and pomegranate, the lily being the national flower of Egypt and the pomegranate that of Palestine, thus showing the half Egyptian and half Israelitish origin of the birthright nation of which the tribe of Dan was part. (page 265)

The discovery of this trumpet essentially proves beyond doubt that the Danish people are direct descendants of the ancient Tribe of Dan, one of the twelve original Tribes of Jacob-Israel.  This fact may explain why a hundred years after Allen’s book was written, any mention of this trumpet appears to have been scrubbed from current history books and online archives.  It also explains why a search for this trumpet on the National Museum of Denmark’s website returns no results.

And keep in mind that these Seven Trumpets are also mentioned in the New Testament in the Book of Revelation, Chapter 8, “And I saw the seven angels who stand before God, and seven trumpets were given to them.”

It should be obvious why the discovery of this historic trumpet had to disappear down the memory hole.  After all, we are told by “credible” so-called “experts” that all the Tribes of Israel were lost in the mists of time, except for one: the Jews.  And if the Danes have a historic connection to the Temple in Jerusalem, then who are these Jews today who make the same claim?  Both cannot be true; it’s one or the other.  And since the 1981 edition of  The Jewish Almanac candidly admits, “Strictly speaking, it is incorrect to call an ancient Israelite a Jew or to call a contemporary Jew an Israelite or a Hebrew,” it is safe to assume who the real Israelites are today.