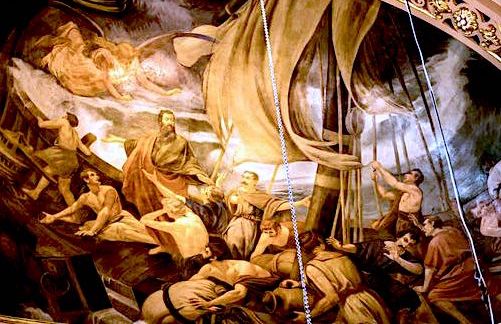 In the 1848, James Smith (1782-1867), a Scottish-born scholar on sailing and ancient history, published his book, The Voyage and Shipwreck of St. Paul, in which he retraced the actual sea routes described in Luke’s accounts of the Apostle Paul’s travels and found them to be remarkably accurate:

At first glance, a Victorian sailor might seem an unlikely candidate to make a contribution to the study of the New Testament.  And James Smith of Jordanhill was undoubtedly a sailor.  Born at Glasgow in 1782 and educated at the University of Glasgow, Smith was one of the earliest members both of the Royal Yacht Club and one of the earliest commodores of the Royal Northern Yacht Club.  His first voyage in his own vessel in 1806 was the beginning of a lifelong love affair with the sea.  He took his last cruise in 1866, just a year before his death.

But Smith was much more than just a sailor; he was also a keen student of ancient literature, a scholar who could read with facility not only Greek and Latin but also most of the Romance and Teutonic languages, and a collector of rare books, particularly those relating to early voyages and travels.  His knowledge both of geology and of archaeology was considerable, and on the subject of ships of the ancients he was a recognized authority.

From 1839 to 1846, Smith was abroad—sailing, of course—and he wintered successively at Gibraltar, Lisbon, and Malta.  It was his residence at Malta during the winter of 1844-45 that prompted the investigations that led to the research and publication of The Voyage and Shipwreck of St. Paul, which first appeared in 1848, when Smith was in his mid-60s.

Smith argues persuasively that the shipwreck described in Acts 27-28 took place at the island of Malta.  But he does much more than that.  He shows, by a minute analysis of the text of Acts, by a very careful comparison with other descriptions of Mediterranean shipwrecks by Josephus and Lucian, and by a wide range of nautical information about prevailing winds, soundings, and coastlines, that Luke’s account of the voyage and the shipwreck bears numerous marks of authenticity.  An argument like this, built from numerous details, cannot be compressed into a summary, but it can be illustrated by a handful of instances that all point in the same direction:

-Luke gives only a few disjointed allusions to the distance and direction of the storm-driven voyage from Clauda to Malta, but they work out well enough to enable a sailor to reconstruct a log-book of the ship’s course and speed. Tacking eight points to the north—as close to the wind Euraquilo as was safe—would bring them 476 miles in a little over thirteen days, assuming a rate of drifting of 1.5 miles per hour.  And indeed, on the fourteenth night (Acts 27:27) they had arrived just a few miles from the island.

-In Acts 28:7, Luke refers to Publius as the “first man of the island.”  Smith (pp. 153-54) gives inscriptional evidence showing that this was indeed an official title on Malta.

But he does more than this. Not only was the narrator of that voyage and shipwreck an eyewitness; he was also, Smith shows, a landsman.  In several places, Luke gives an accurate account of the actions of the crew without giving a full account—sometimes without giving any account—of why these actions were necessary.  Again, the argument cannot be compressed, but a few examples will illustrate it:

-The phrase chalasantes to skeuos (27:17) shows both Luke’s accuracy of observation—they were taking down all superfluous rigging—and, arguably, his lack of appreciation of the navigational necessity of this for laying the ship to on a starboard track, with its right side pointed into the wind.

-The crisis of despair (Acts 27:20) may have come when the crew realized they had probably missed Sicily and could never survive in the vain hope of reaching the Tunisian coast intact. Luke notes the despair but gives the reader no indication of what might have caused it.

-Casting anchors from the stern (Acts 27:29) was the proper emergency action to take in the circumstances, preventing the ship from swinging around broadside to the waves and being smashed stern first on the rocks. Luke reports the action without showing any awareness of how unusual it was or why it was necessary.

-Once they were ready to try to run the ship ashore at daylight, it was imperative (Acts 27:38) to throw out all remaining weight—no longer necessary for ballast—in order to have the best chance of running the ship bow first as high as possible on the beach. Once again, Luke reports the action, but he gives neither the reason that the grain was retained earlier nor the reason that it was now thrown overboard.

The value of such historical material, at once unprofessional and yet meticulously accurate, cannot easily be overstated. Smith’s work puts it beyond all reasonable doubt that the author of these latter sections of the book of Acts actually accompanied Paul on his great voyage to Rome, and in so doing he provides a great deal of evidence that redounds to Luke’s credit as an historian.

Smith’s findings about the accuracy of Luke’s writings were later confirmed by Sir W.M. Ramsay in his 1895 book, St. Paul the Traveler and Roman Citizen, who wrote, “Luke is a historian of the first rank; not merely are his statements of fact trustworthy, he is possessed of the true historic sense… In short, this author should be placed along with the very greatest of historians.”