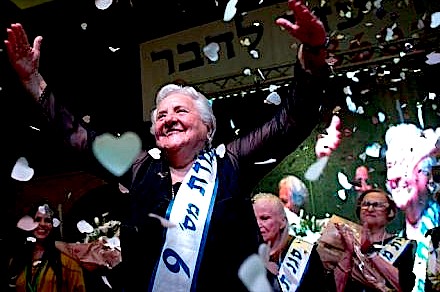 Jews who somehow managed to survive World War II are set to receive an “upgrade” in the compensation they receive from the German government, after an agreement was signed on Thursday between the finance ministries of Israel and Germany:

The Holocaust Survivors’ Rights Authority – which is housed within the Finance Ministry and leads the initiative to improve the conditions of Holocaust survivors in Israel – assessed that there was a need to increase the stipends the German government pays directly to survivors.

The lengthy negotiation between the authorities resulted in the signing of a memorandum of understanding, according to which survivors will receive an additional €100-€400 per month.  This increase will raise total funds that Germany pays them each year to €15 million.

“I am pleased to announce the significant addition to the benefits of Holocaust survivors who are receiving direct stipends from Germany,” said the authority’s director, Ofra Ross, who called the addition “unprecedented.”

She further thanked the German representatives for their professional negotiations and goodwill in reaching this agreement.

The Holocaust Survivors’ Rights Authority has also implemented measures to improve the lives of survivors.  The steps include grants of NIS 10,000 a year, exemptions on paying for medicine, increased nursing assistance, and employing volunteers to ease their loneliness.

There are some 200,000 Holocaust survivors living in Israel, with around 50,000 living at or below the poverty line.

Virtually every so-called “Holocaust survivor” who is still alive and kicking today had to have been a young child during WWII, and since according to the Official State-Sanctioned Version of events, the “evil” Nazis had a policy of sending all young children directly to the “gas chambers” upon arriving at the camps because they were too young to be of any value as slave labor, it would be fair to say that it is truly a “miracle” that any of today’s survivors are still around to collect these fat monthly checks courtesy of the German taxpayers, hardly any of whom were even alive during WWII.

But in another ten years or so, most of these “survivors” will have certainly died of extreme old age, unless, of course, another “miracle” occurs and they beat all statistical odds and live well into their 100s.  And since they now have 3-D Holocaust survivor holograms to give their testimony for the rest of eternity, certainly the German taxpayers will be expected to continue to lavish benefits on the holograms after the flesh and blood survivors pass on into the ether.  But today everyone is encouraged to be a “survivor” of something that give them an arbitrary identity, and perhaps these elderly Jews could use some healthy competition: