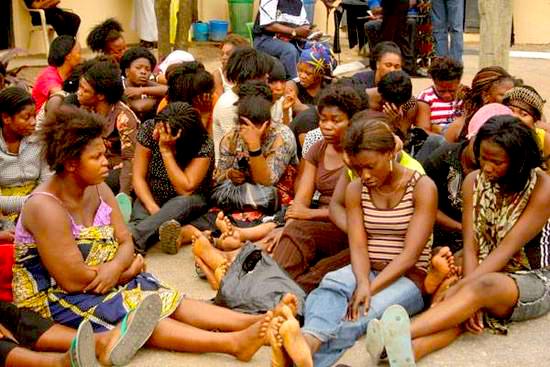 Nigeria’s anti-trafficking agency said it has found thousands of missing girls and women in southern Mali, many of whom were sold as sex slaves:

According to the agency, NAPTIP, there are between 20,000 and 45,000 kidnapped Nigerian women in Mali it intends to return to Nigeria.

“They were tricked into going to Mali by giving them the impression they were going to get jobs in hotels, for example,” Okah-Donli told Al Jazeera.

“Some were actually abducted while going to school.

“There are over one million Nigerian residents in Mali, out of which about 20,000 are trapped into forced prostitution. The conditions are horrible. They are kept in the thick of the forest where they cannot escape and with the ‘madames’ watching over them.”

In 2014, armed group Boko Haram abducted more than 276 schoolgirls from the town of Chibok, Nigeria.

The kidnapping captured the world’s attention, with celebrities and prominent personalities such as former US First Lady Michelle Obama joining a “Bring Back Our Girls” campaign to free them.

Around 2,000 girls and boys have been abducted by Boko Haram since 2014, many used as sex slaves, fighters and even suicide bombers, according to Amnesty International.

According to a 2018 report by the US State Department, human trafficking is a major problem in Africa’s most populous country.

Nigerian victims of human trafficking were found in about 40 different countries, the report stated, adding that “80 percent of all female Nigerian migrants in Italy are or will become sex trafficking victims”.

Perpetrators of human trafficking are not only criminals and armed groups such as Boko Haram, which controls large parts of northern Nigeria, but also groups within Nigeria’s armed forces.

American Blacks can’t stop talking about the horrors of their ancestors being slaves 150 years ago, and they’ve been demanding cash reparations for it for just as long.  But the slave trade is alive and well in Africa, and its being run by Black Africans, just as it was 500 years ago when they sold off their fellow Africans to the jewish slave traders who brought them to the New World.  In this case, because there are no White people to shake down for “reparations,” Blacks are collectively looking the other way at this modern slavery.

Blacks object to slavery only when there is a cash incentive to get paid back for it.  In countries like Brazil where there were millions of Black slaves, no one is demanding “reparations” from the government because there are no guilty White people who would be willing to pay up.

If complaining about something produces a pay day, then it must be “evil”.  Apartheid is “evil” because it can be used to rationalize stealing White land to make things “right”.

If there was no White wealth to “expropriate,” then Apartheid would be long forgotten by now.