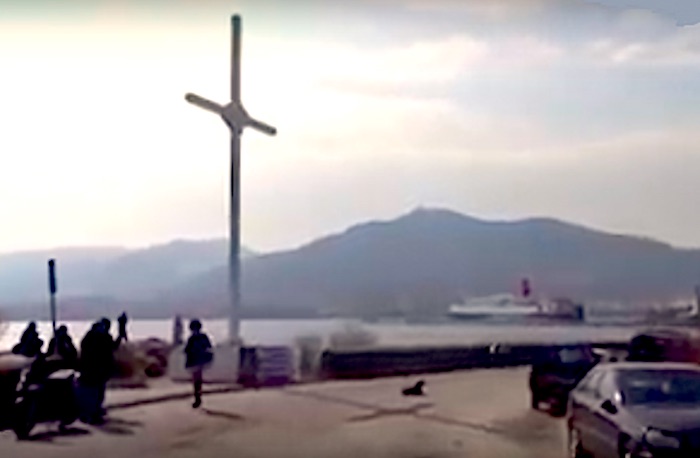 Dozens of people were arrested on Sunday on the Greek island of Lesbos for erecting a giant metallic cross meant to deter migrants and refugees from reaching the island:

Police arrested 35 Greek citizens and an Albanian man on charges of arbitrary occupation of public property and erecting an illegal construction. The site on the cliffs of Apellia in Mytilene — Lesbos’ capital city — is on the grounds of the island’s famed fortress and is protected by archaeological law.

It comes after a cement cross was similarly erected in August 2018, drawing the ire of the local “Coexistence and Communication in the Aegean” group, which denounced the monument as “offensive to the symbol of Christianity, a symbol of love and sacrifice, not of racism and intolerance.”

It labelled those who had erected it as “aspiring crusaders” and called on authorities to take it down.

It was destroyed by vandals in the night a month later but no-one was arrested.

Some locals later demanded the cross be restored, including the far-right “Free Citizens” party, which argued in a statement last month that the “Syriac mass, which ravages our country’s power, has attained its highest goal: the total destruction and extinction of every Greek and Christian element of our Greek Orthodox culture.”

The Greek island, located in the Aegean Sea near the shores of Turkey, became one of the main gateways to Europe when the migrant and refugee crisis erupted to new heights in 2015.

If only these same people had erected a giant jewish menorah, they never would have gotten arrested because migrants would see the menorah as a huge “everyone welcome” sign unless it was planted in Israel where non-jewish migrants couldn’t be less welcome.  The Greek Orthodox Church is still very popular and powerful, but obviously there’s a small, more powerful (((minority))) operating in Greece that is able to continue to subvert and destroy the country.

Christians have traditionally planted the cross in areas that they have conquered or occupied, and the fact that they are now being forced to remove them from public view is proof that Christians no longer occupy the highest levels of power in formerly Christian countries.  And any country that does not demand that their leaders are White and Christian will be destined to be ruled over by Jews, which is what we are seeing here and all over western Europe.  And don’t ask why it’s okay to display menorahs in public but not Christian crosses —  that’s a question that only an antisemite would ask.