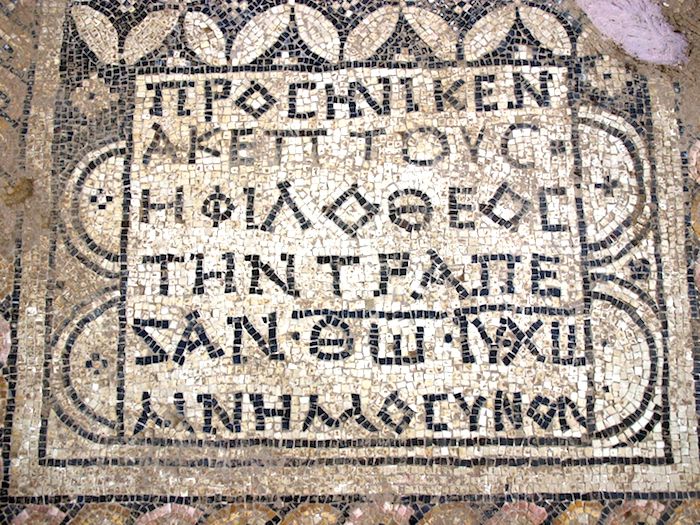 An excavation at the site of the Megiddo Prison in Israel has uncovered one of the earliest Christian houses of worship yet discovered, which includes a mosaic identifying Christ as God:

The salvage excavation, following earlier surveys and conducted from 2003 by Tepper (then affiliated with Tel Aviv University) and the Israel Antiquities Authority – identified ruins in the prison grounds as the Jewish and Samaritan village of Othnay, mentioned in Jewish sources as existing from the first to the fourth centuries, and a large structure that seems to have been a pre-church house of Christian worship, as well as unexpected clues about the complicated nature of early Christianity. Such as, maybe the Roman army wasn’t entirely negative about the upstart religion after all.

Dated to the year 230, very early in the Christian era, the mosaic bears three inscriptions in ancient Greek – one explicitly calling Jesus a deity.

“The god-loving Akeptous has offered the table to God Jesus Christ as a memorial,” the writing says, in black tesserae letters 7.5 to 9 centimeters in height. Akeptous is believed to be the name of a woman who paid for a communion table that probably served for the Eucharist ceremony.

The mosaic floor was inside a large building about 30 meters by 40 meters in area that seems to have been residential, not a classic church or basilica, Tepper says. Churches didn’t exist in the third century. But Christianity had begun to take form, and while Romans seem to have lived in some of the house’s rooms, the one with the mosaic would probably have been a prayer hall.

…The mosaic also features fish, which are considered a symbol of early Christianity.

And the mosaic may point to another thing entirely: That the world has misunderstood the complexity of the Roman attitude to nascent Christianity.

…“We think some of the Roman soldiers at Legio were Christian,” Tepper avers, and most importantly, they weren’t in hiding. Nor was the Christian prayer house in Othnay scaled down or concealed.

The evidence is that the name of the mosaic donor appears to be that of a Roman centurion: Gaianus, who was also called “Porophrius, our brother.”

All this contravenes the conventional wisdom that Rome imposed blanket hostility on early Christianity.

The period when this house of worship was used was a time of decline for the Roman Empire, and Christianity was supposed to have been banned. Possibly, early Christians were persecuted just as history tells, in Asia Minor, but not in Israel.

“Here the Romans had Christian officers,” Tepper explains. “The persecution may have been exaggerated later in the telling. But certainly the tales do not reflect the complexity of the reality, which is that there were Christians in the Roman army.”

…And then in the year 312, Emperor Constantine had a dream, or a vision, depending on who was telling the story. It persuaded the emperor that marking the soldiers’ shields with Christian symbolism would assure victory over his enemies. (Possibly arguing in favor of history rewritten in hindsight, the Arch of Constantine in Rome – erected to mark his victory over fellow Roman emperor Maxentius in October 312, which brought Constantine sold control over the empire – is bereft of clearly Christian symbols.)

Following Constantine’s conversion, whole Roman legions would kneel and accept Christianity. But as we said, that was a century after somebody bought a beautiful mosaic for the floor of the early Christian house of worship in Othnay.

Of note is the fact that this early pre-Catholic mosaic identifies Christ as God, not as “a god” or the “son of God”.  This is a significant distinction as the “Holy Trinity” contrived by the Catholic Church does not appear in the New Testament writings, and this archeological discovery would seem to suggest that the earliest pre-Church Christians did, in fact, identify Christ as God incarnate rather than as part of a complicated triumvirate with pagan roots.

Also significant is this new evidence of the earliest examples of Christian conversion of Roman soldiers, which, before this discovery, would have been considered improbable given the hostility that Rome, at the behest of the Jews, displayed toward many early Christians.  Perhaps early Christians weren’t nearly as “underground” as we’ve been led to believe.