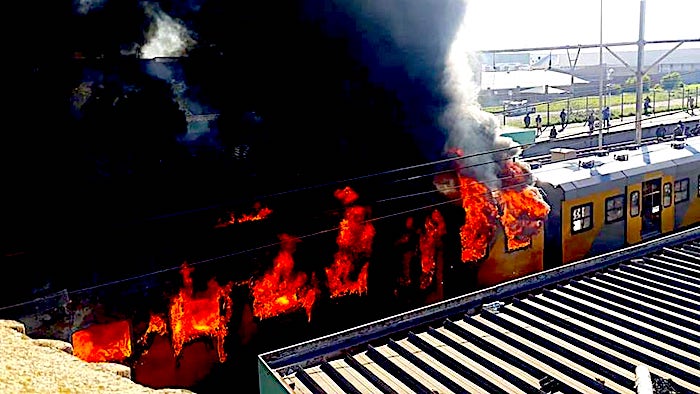 Capetown’s MetroRail public train system has been crippled by rampant acts of arson and vandalism by Blacks, with less than 50% of trains in service:

Over the past three years, more than 150 MetroRail carriages have been destroyed due to arson and vandalism, with 2018 proving to be the most devastating year yet. Walker confirmed that, in this year alone, 40 coaches had been destroyed so far, with the cost of damages exceeding R100 million.

These attacks have crippled MetroRail services in the region, forcing the company to provide alternate transportation arrangements, via buses, to thousands of stranded commuters. Simply put, MetroRail is no longer in a position to adequately service Cape Town.

Walker bemoaned the fact that since October 2015, MetroRail’s fleet had been steadily dwindled down, saying:

“We are looking at R300 million just in damages to the coaches since 2015. The rate in which we are losing our coaches it is far exceeding our ability to bring them back and that is a major concern.”

This is undoubtedly the question on everybody’s lips. Cape Town mayoral committee member for transport and urban development, Councillor Brett Herron, is adamant that these attacks are motivated by something, or someone, that stands to profit from MetroRail’s destruction.

National Transport Minister Blade Nzimande has also pointed to ‘serious organised crime’ as being behind the attacks, saying:

“There are ordinary criminals who are actually vandalising trains‚ there’s copper theft and all that‚ but also at the same time there are elements of serious organised crime. We are talking to the police now to establish whether there are any commercial benefits to the people who burn trains.”

Worryingly, despite ongoing investigations into arson attacks on MetroRail’s trains, few solid answers have come to light. As a proactive measure to guard against further attacks, the city is in the process of deploying 100 railway police, tasked with protecting MetroRail infrastructure.

African “organized crime” is an obvious oxymoron — nothing about Black Africa is “organized” which is why it is in the abject state that’s it’s in.  How exactly do Blacks benefit from destroying their own train system?  They don’t, which means that this crime wave directed at the train system is not rational, but rather just another example of misplaced Black anger and frustration.

If only 50% of the trains are now running with Whites still very much involved in running the infrastructure, what’s going to happen to the trains when Blacks eventually control most of it?  The simple answer is that South Africa is steadily heading toward the heart of darkness, and Whites should do whatever they can to get out while they still have something worth saving.