60 Years After Monkeys Launched Into Space, An Arab Finally Gets His Turn In ‘Historic’ First 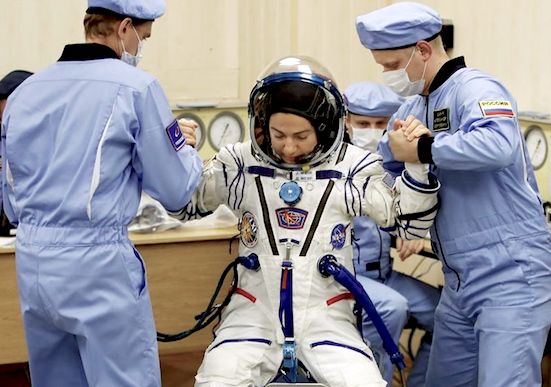 To commemorate the 60th anniversary of the first successful launch and retrieval of monkeys into space, White scientists have finally figured out how to send up their first Arab in a ‘historic’ first:

An Emirati astronaut who will make history by becoming the first Arab on the International Space Station said Tuesday he had received support from around the world before his “dream” mission.

Hazzaa al-Mansoori, 35, is set to blast into space accompanied by Russia’s Oleg Skripochka and NASA astronaut Jessica Meir — a Swedish-American Jew whose father is Israeli — onboard a Soyuz rocket from Baikonur in Kazakhstan on Wednesday.

Mansoori, who will spend eight days on the ISS, will be the first Emirati astronaut and the first Arab on the orbiting laboratory, but not the first Muslim.

“It is really an honor and we are looking forward to make this mission successful and to come back with a lot of knowledge,” the pilot told a pre-flight news conference.

He said the trip was a milestone for his country and the Arab world.

“This achievement will be in history and it will be continued,” he said. “The dream has come true.”

Mansoori said that he would record his prayer routine on the ISS and broadcast it to people on Earth.

“As a fighter pilot I already prayed in my aircraft,” he said, explaining that he had experience of prayers at high speed.

Mansoori also plans to conduct experiments and said he would take Emirati food with him to share with the crew.

Skripochka, first-time flyer Meir and Mansoori will join a six-member crew on the ISS and for a brief period of time the ISS will be home to nine astronauts.

What exactly is there to be so “proud” of for this Arab, or for other Arabs in general?  They don’t have the ability to develop the technology to get into space on their own, so when NASA and Russia finally decide to send one up like a trained monkey, they consider it some kind of “accomplishment”.

Riding on the coattails of White people is apparently considered an accomplishment for ‘people of color’.  That should be a source of shame not pride.

And taking Arabic food up into to space and sharing it with other crew members is not an “science” experiment unless we lower the bar to make them feel important.  Broadcasting Muslim prayers back to Earth is not a “breakthrough” for “humanity”.

Let’s not sugarcoat this event: what this Arab “astronaut” is accomplishing is not much more difficult than getting on a common airliner and taking a flight to New York.  And without White technology, Arabs couldn’t even figure out how to do that on their own.

Using NASA technology to sell “diversity” to the world won’t change reality.  Let’s see them get there without our help so they can actually feel good about themselves, but we won’t hold our breath waiting for that to happen.