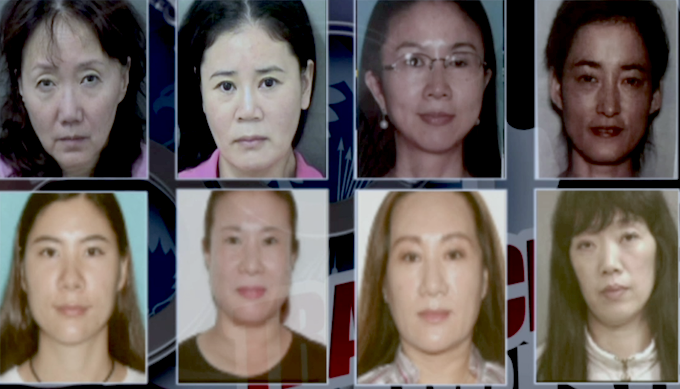 Police say eight Chinese women have been arrested in connection with a massive human trafficking bust that spans several counties in South Florida:

Records show the women range in age from 27 to 58 and most of them are Chinese nationals.

According to police, Ruimei Li, Lixia Zhu, Hua Zhang, and Lei Wang were running spas in both Palm Beach County and Martin County.

The women are facing similar felony and misdemeanor charges including racketeering, money laundering, maintaining a house for prostitution, engaging in prostitution and deriving support from prostitution.

Attorney Michael Salnick said most of the charges don’t carry much more than one year in prison, especially if the women are first time offenders.

Salnick said racketeering and money laundering carry the highest penalties of up to 30 years in prison.

Salnick said time served will depend on many things, including the women’s cooperation.

“They may think that if they testify they can get hurt, danger could come to them,” he said. “Some of these women hopefully will think these people aren’t going to jail for me and I’m going to tell you exactly what’s going on here because I don’t want to go to jail for something that I was put in the middle of.”

Salnick said if any of the women are not U.S. citizens and are convicted of a felony with a sentence of more than a year, there is a possibility they would be deported.

Well, that’s reassuring: there’s a “possibility” that some of these organized criminals “might” be deported.  They are often engaged in the same type of crime that the infamous “Mafia” engages in, but since they are petite Asian women, it’s not as bad, or perhaps it’s because they service the likes of Robert Kraft, the jewish billionaire owner of the New England Patriots.  And sending them to jail for three to five years is not going to deter them or their Chinese underlings.  And, no, these women are not “victims” themselves.

America needs to wake up to the fact that virtually every America city now has a network of Asian-owned “nail salons” and “massage parlors” that front for prostitution operations.  If the FBI wanted to shut this nation-wide network down overnight, it could do so, but that would result in some very embarrassing arrests of “fine” and upstanding” local citizens, like more Robert Krafts.  Asians are no better than other non-White immigrants who undermine our Christian societies.  Their ways are dark, and their history is one of cruelty and exploitation of each other.  Their much vaunted “high IQs” merely makes them better criminals who quietly cheat our institutions.