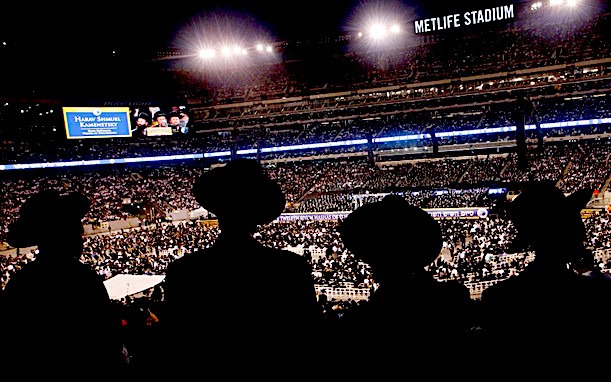 A crowd of 88,000 Jews gathered at MetLife Stadium on Saturday to celebrate the reading of the entire Talmud, a historic event that drew heavy police presence after the recent spate of anti-Semitic attacks in the metropolitan area:

The Siyum HaShas event marks the end of the 7 1/2 years it takes to read the 2,711-page Babylonian Talmud, the source of ethics and laws for Orthodox Jews. The East Rutherford, N.J., event is one of several celebrating the cover-to-cover religious review, with one recently held in Mexico City and more expected elsewhere in upcoming weeks.

More than 50 law enforcement agencies, including more than 300 uniformed New Jersey State Police troopers, stood guard as the event took place, though police reported no incidents during the day.

“We see what’s been happening here, all of the anti-Semitic attacks last week and on the streets of New York,” said Rabbi Daniel Wasserman, who came to the Garden State from Pittsburgh. “Whatever the reasons are, I’ll leave that to the political scientists.

“But the reality is that whether it’s ourselves or any ethnic group, we are here. We’re proud. We’re not going anywhere. And this is a perfect example of it.”

The stadium held a bigger crowd than the 78,000 typically welcomed by the Giants and the Jets, with tailgaters arriving on an overcast day with temperatures in the upper 30s. Early arrivals ate, drank and danced in the parking lot before heading inside for the main spiritual event.

It is no coincidence that exactly 80 years ago, almost to the month, the German-American Bund held a rally in Madison Square Garden in New York City to show its support for the National Socialist miracle that brought Germany up out of the depths of despair created by jewish-dominated Weimar Republic.

Fritz Kuhn, the president of the German Bund, gave an opening speech in which he told the crowd of 22,000 enthusiastic supporters the ‘dangerous’ and ‘hateful’ idea that the United States needed to be ruled by “socially-just White gentiles.”

Just like with the magic “6 million” number for the “Holocaust”, the official 88,000 Khazar Jews in attendance at Giants stadium was no doubt rabbinically-predetermined to fulfill some occult significance according to their Gematria to echo the 80 years since the Bund rally.

Of course, they weren’t merely celebrating the Talmud — they were really there to celebrate the “triumph” of the “jewish will” to dominate not only America but all of Christendom, their sworn enemy, which their “holy” Talmud makes abundantly clear.

No wonder they feared they needed 50 different law enforcement agencies to protect them, just in case the goyim figured out what they were really doing.