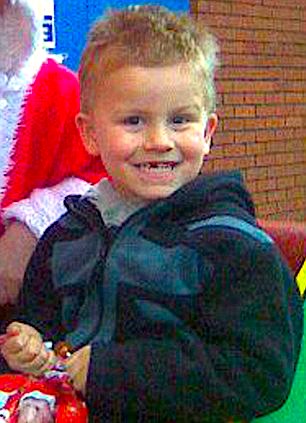 Authorities believe that 9 year old Aaron Dugmore may be one of the youngest people ever to commit suicide in England, when his body was discovered at home after he had complained about being repeatedly tormented at school by non-Whites:

A boy of nine who was found hanged is believed to have killed himself after he was ‘bullied for being white’ by an Asian gang at school.

Aaron Dugmore – thought to be one of the youngest children in the UK to commit suicide – was discovered in his bedroom after being tormented for months, his parents said.

They said Aaron was threatened with a plastic knife by one Asian pupil, who warned him: ‘Next time it will be a real one.’

He was also allegedly told by another pupil that ‘all the white people should be dead’ and he was forced to hide from the bullies in the playground at lunchtime.

Aaron’s mother, Kelly-Marie Dugmore, 30, and stepfather Paul Jones, 43, said that despite complaints to the school, nothing was done to stop the bullying.

Aaron had recently started in Year Five at Erdington Hall Primary School in Birmingham, a school where 75 per cent of pupils come from ethnic minority backgrounds.

According to staff at the school he had already ‘settled in quickly’ with his classmates after he joined the school last September when his family moved nearby.

The school, which caters for 450 pupils aged three to 11, received an ‘inadequate’ rating by Ofsted inspectors last year.

Aaron was discovered by Miss Dugmore hanged in his bedroom at the family home in the Erdington district of Birmingham at about 6pm on February 11.

He was taken to Birmingham Children’s Hospital where doctors desperately attempted to revive him but he died the following day from a suspected cardiac arrest.

What happened to little Aaron is what’s happening to the entire White British race — it is committing collective suicide by allowing its nation to be flooded by violent, incompatible non-White invaders.  The torment that Aaron experienced is happening to thousands of White school children in every White country, but the jewish-controlled media will only allow you to hear about non-Whites being allegedly bullied by Whites because that it is the false narrative that is being forced upon the public.  If Aaron had been a Black child who was bullied into suicide, there would be a national day of mourning for the child.

These students are taught in school a steady diet of hate directed at the “evil” British Empire and all horrible acts it allegedly perpetrated against “people of color” during its “repressive” colonial expansion.  White students, like Aaron, are taught to feel ashamed of themselves and their ancestors, while the non-Whites are taught to hate their White oppressors and glorify their “victimhood.”  And if Whites defend themselves, they are called “racists” and “Nazis”.  When investigating this crime, the police need look no further than the jewish-controlled meida outlets in England which made this suicide possible.