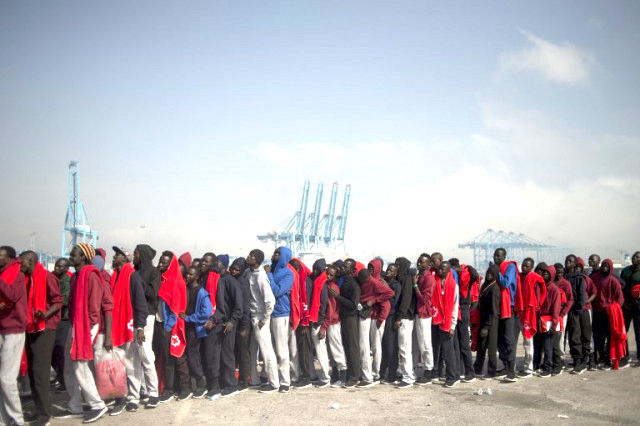 An African migrant who made an alleged 5-year journey from Ghana to Spain admitted in an interview that it was virtually impossible to enter Europe illegally without the help of human traffickers:

They scale barbed-wire topped fences and cross the sea in inflatable boats or jet skis — more than 36,000 migrants entered Spain this year seeking a better life in Europe. Almost all of them relied on smugglers to make the crossing.

Ousman Umar, who made a five-year journey from Ghana to Spain, said it was “impossible” to travel thousands of kilometres (miles) from sub-Saharan Africa through deserts and other inhospitable areas without the aid of gangs.

“There is almost no chance of reaching Europe illegally” without paying traffickers, Robert Crepinko, the head of the human smuggling unit at Europol, the European Union’s policing arm, told AFP.

Ninety percent of migrants who enter Europe are helped by human traffickers, he added, citing a 2015 study.

Spain has become the main entry point for migrants arriving this year,after Italy and Greece.

“The journey can last one year, two years, depending on the ring and the funds you have, because the trafficking networks will take you as far as you can pay,” Jose Nieto Barroso of the national police’s human smuggling unit UCRIF told AFP.

Migrants gather in Morocco because “it’s the best place to wait for the right moment to cross” over to Spain, said Nieto Barroso.

The vast majority pay for a spot on an inflatable dinghy or to take part in a mass run on the heavily fortified border fences that surround Ceuta and Melilla, two tiny Spanish territories in North Africa that share the EU’s only land borders with Africa.

Human traffickers charge 18 euros ($21) to try to scale the border fences, 200-700 euros to join a packed boat to cross the narrow Strait of Gibraltar separating Spain from Morocco by just 15 kilometres (nine miles) at its narrowest point, or up to 5,000 euros to make the trip by jet ski, according to Spanish police.

Europol estimates migrants pay on average €3,000-5,000 for a complete trip to Europe.

Since the average African makes about $300 per year, it is virtually inconceivable that any of them have saved up the necessary three to five thousand euros to make the trip to Europe.  And any African carrying that kind of money would be robbed and killed immediately — so it begs the question: who is really paying for this mass invasion — and who benefits?

The answer is simple: a vast array of jewish-funded charities and NGOs are aiding and abetting these invaders, without whose help these Africans would not be making it to the shores of Europe alive in any significant numbers.  One of the easiest and most cost-effective ways of ending the migrant crisis would be to out-law these charities and charge them with treason — or simply strip them of their tax-exempt status.