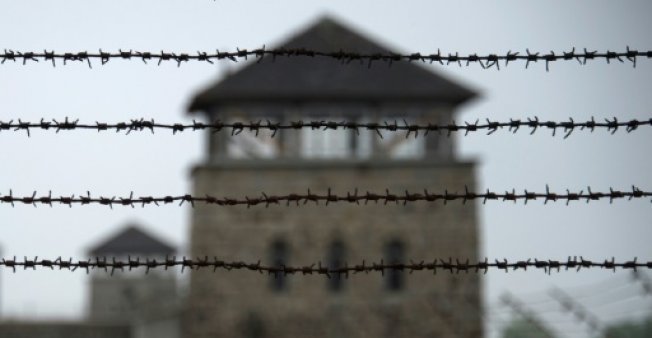 Despite the fact that no credible historian asserts that there were extermination gas chambers at the Mauthausen work camp in Austria during World War II, the German court will nevertheless prosecute a former German guard at the camp for aiding and abetting the gassing of thousands of Jews:

German prosecutors on Friday charged a 95-year-old man with more than 36,000 counts of accessory to murder over his alleged time as a Nazi concentration camp guard during World War II.

The allegations against the accused, identified only as Hans H., concern atrocities committed at the Mauthausen camp in Austria, the Berlin public prosecutor’s office said in a statement.

Hans H. is believed to have belonged to the SS-Totenkopfsturmbann (Death’s Head Battalion) between summer 1944 and spring 1945 at Mauthausen, part of the Nazis’ vast network of concentration camps where inmates were forced to perform slave labour.

Prosecutors argue that by working as a guard at the site, the accused contributed to tens of thousands of prisoner deaths.

During his time at the camp, at least 36,223 inmates died. Guards took part in killings by gas, fatal injections, gunfire and other means, while many more prisoners died of hunger or frostbite, prosecutors said.

“The accused is believed to have been aware of all the methods of killing as well as the disastrous living conditions of the inmates,” their statement said.

“It is believed that he knew these methods of killing were used against a large number of people and that they could only be killed in this way, with this degree of regularity, if the victims were guarded by people like him.”

A total of 200,000 people were held at Mauthausen, half of whom died before the camp’s liberation by US troops in May 1945.

A Berlin court must now decide whether the case against Hans H. can proceed.

Germany has been racing to put on trial surviving SS personnel, after the legal basis for prosecuting former Nazis changed in 2011 with the landmark conviction of former guard John Demjanjuk.

He was sentenced on the grounds that he served as a cog in the Nazi killing machine at the Sobibor camp in occupied Poland, rather than for murders or atrocities linked to him personally.

If this accused man attempts to defend himself by claiming the historical fact that there were no gas chambers at Mauthausen, he will be charged and convicted of Holocaust denial, and his sentence upon rubber-stamp conviction will be compounded by the kangaroo court.  Even though the prosecution is admitting that it has no evidence directly linking this man to one single instance where an inmate was killed or even abused, he will nevertheless be convicted of genocide.  When Jews control the legal system, every single one of us could face this same Kafka-esque and Orwellian farce that passes as “justice”.

And it’s hard not to notice the vague and predictable use of  the phrase “it is believed…” in this article, and almost every article that concerns the so-called Holocaust.  “Believed” by whom?  Being an accused “Nazi”, neither this man nor the public has the legal right to know the identity of his accusers or the evidence upon which these accusations are being made.  We simply need to trust the Jews that “justice is being served.”

But make no mistake, today all you have to do is criticize the Jews and you’ll find yourself facing criminal charges so serious that you’ll think you gassed six million of them.