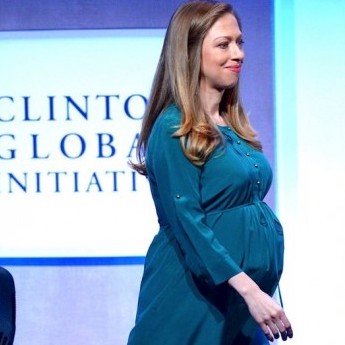 Chelsea Clinton, an outspoken advocate for abortion on demand, has announced that she is pregnant once again, apparently with her third child by her jewish husband, Marc Mezvinsky:

Chelsea Clinton has announced her family is expanding. The 38-year-old former first daughter tweeted Tuesday that she and her husband Marc are expecting another child in the summer.

Clinton and 41-year-old investment banker Marc Mezvinsky, who is Jewish, were married in 2010 under a traditional huppah, or wedding canopy, and recited the traditional sheva brachot, or seven wedding blessings. A rabbi and a Methodist minister officiated at the wedding. The couple signed a ketubah, or Jewish marriage contract.

They live in New York.

Clinton is writing another children’s book to accompany the two she’s already published. The picture book about endangered animals is slated for an April release.

The naked hypocrisy of liberals like Clinton knows no bounds.  As she encourages all women to defend their “right” to abort their own unborn children for any reason whatsoever, Clinton turns around and has a large family, by today’s standards, of her own.  Clinton never hesitates to lecture us on our “Christian” imperative to keep abortion legal, while she marries a Jew, in a jewish ceremony, and has three jewish children.

But hasn’t that become the thing to do in socially-elite circles in America, marry off your sons and daughters to Jews?  Trump, Clinton, and Gore all did it, and maybe the rest of wealthy America should do it, too, to ensure that the wealth of all nations will fall into the hands of the Jews, a plan that was articulated by Baruch Levy in a letter to Karl Marx:

“The Jewish people as a whole will be its own Messiah. It will attain world dominion by the dissolution of other races, by the abolition of frontiers, the annihilation of monarchy, and by the establishment of a world republic in which the Jews will everywhere exercise the privilege of citizenship. In this new world order the Children of Israel will furnish all the leaders without encountering opposition. The Governments of the different peoples forming the world republic will fall without difficulty into the hands of the Jews. It will then be possible for the Jewish rulers to abolish private property, and everywhere to make use of the resources of the state. Thus will the promise of the Talmud be fulfilled, in which is said that when the Messianic time is come the Jews will have all the property of the whole world in their hands.”