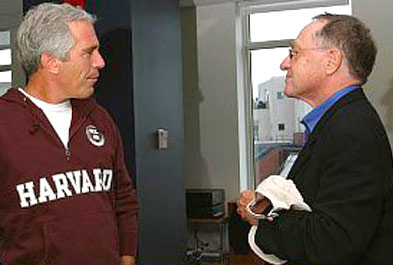 In 1997, Alan Dershowitz, who has been accused of rape and pedophilia by alleged female victims involved with the Jeffrey Epstein pedophile ring, wrote an opinion column headlined “Statutory rape is an outdated concept”:

Now, 22 years later, he’s defending the column on Twitter, at an awkward time: Dershowitz was a member of the team that got convicted sex offender Jeffrey Epstein a plea deal that sent him to prison for 18 months, a sentence that critics today say was unusually brief and lenient. Epstein is now being prosecuted for sex trafficking, and is accused of sexually abusing dozens of underage girls.

Dershowitz, a prominent defense lawyer and emeritus Harvard University law professor, himself faces accusations of sexual abuse from two of Epstein’s alleged victims — Virginia Roberts Giuffre and Sarah Ransome. He vehemently denies the accusations against him.

The 1997 column is getting renewed attention after it was quoted in a current New Yorker article about Dershowitz and his entanglement with Epstein. In the column, which ran in the Los Angeles Times, Dershowitz argues that statutory rape is an increasingly irrelevant legal concept as teenage sex is normalized and rarely prosecuted.

“This raises a fundamental question about the continuing legitimacy of statutory rape laws at a time when sex involving teenagers is so rampant and prosecution for statutory rape so selective,” Dershowitz wrote. “It is obvious that there must be criminal sanctions against sex with very young children, but it is doubtful whether such sanctions should apply to teenagers above the age of puberty, since voluntary sex is so common in their age group.”

He then suggests that the age of consent should be lowered to 15, or perhaps even 14.

Facing a barrage of criticism — for his handling of the Epstein plea deal, for the allegations against him and now for this column — Dershowitz has been unapologetic. He told the Jewish Telegraphic Agency earlier this month that “I have no misgivings and I will continue to represent controversial people. That’s what I do. If I’m in a case, my job is to get the best possible result.”

He similarly defended the 1997 column in a series of tweets. He said there should be “Romeo and Juliet exceptions” to statutory rape.

This is a typical legalistic shell game called “reducto ad absurdum,” which attempts to prove the absurdity of a premise (statutory rape) by implying essentially that teenagers “rape” each other every time then engage in sexual activity.

Statutory rape laws are not in place to protect teenage girls from necessarily engaging in illicit sex with teenage boys, and Dershowitz knows this.  Those laws are in place so that adult sexual predators like Jeffrey Epstein and allegedly his close friend Alan Dershowitz cannot exploit underage girls without criminal consequences.

And using absurd laws which allow teenage girls to have legal abortions to somehow illustrate the “absurdity” of statutory rape laws is another typical sophistic argument, but that’s how jewish legal “minds” deconstruct our moral and legal safeguards, by pitting one absurd and immoral concept against another to demonstrate some “contradiction” to abolish both.

It should be transparently obvious that Dershowitz has a dog in this fight, as he would benefit greatly from not being arrested for having “consensual” sex with 14 year old girls that Jeffrey Epstein has allegedly procured for him.