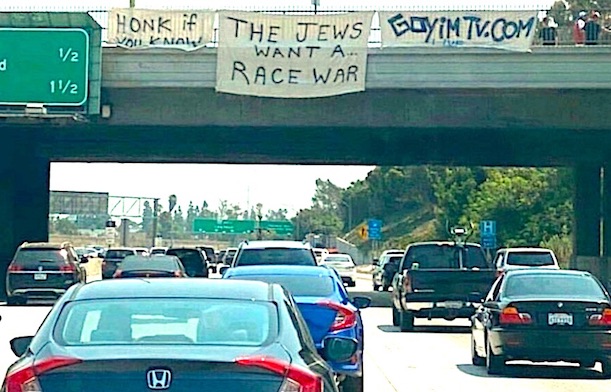 While many Jews expressed shock and outrage over banners hanging from a Los Angeles freeway overpass, including one that warned, “Honk if you know the Jews want a race war,” representative of the Anti-Defamation League begrudgingly admitted that the protestors’ ‘antisemitic’ opinions are legal and constitutionally protected:

That was the message scrawled on two signs hanging Saturday on a Los Angeles overpass in view of hundreds of passing cars on I-405.

Now it appears that Jon Minadeo Jr. of Petaluma, a city in Northern California about 40 miles from San Francisco, and a handful of others who make up what is known as the Goyim Defense League were behind the hateful display. Last year Minadeo was linked to anti-Semitic flyers posted in the San Francisco Bay Area.

In a roughly two-minute cellphone video shared with J. by the group StopAntiSemitism.org, Minadeo and the others can be seen standing behind the banners on top of the overpass cheering as cars and trucks stream through…

The signs included an advertisement for the group’s video-sharing site Goyim TV, which generates revenue via paid monthly subscriptions.

Known as a “banner drop,” the act was just one of many that Minadeo and his crew engaged in while driving around Los Angeles in a white van over the weekend, recording their activities during what they called a “Name the Nose Tour.”

…Handsome Truth was first identified as a 37-year-old Bay Area man last August using Sonoma County business records after flyers accusing Jews of being behind the 9/11 terrorist attacks appeared in Novato and Santa Rosa. The idea that Jews celebrated 9/11 is a running theme throughout Minadeo’s videos.

During the Los Angeles tour, the group stood in front of a Chabad center in Marina Del Rey and shouted through a megaphone, “These Jewish terrorists are the people behind 9/11.”

Also, while driving, group members harassed people on the street, shouting “Wake up and understand that Jews have hijacked your country!” To those wearing protective masks, they yelled “take that Yarmulke off your face!” (Minadeo believes masks are a government conspiracy and are harmful to health.)

…The Los Angeles office of the Anti-Defamation League said it received “numerous constituent complaints” about the incident and reported them to law enforcement.

The Goyim Defense League “has been on ADL’s radar since its inception,” wrote Joanna Mendelson, associate director of the ADL’s Center on Extremism, in an email Monday to J.

“The core issue here may rest in the perpetrators‘ exercising their first amendment rights,” Mendelson wrote. “However, it is incumbent on us to speak out against such vile antisemitism and related conspiracies.”

The national Anti-Defamation League wrote in a statement on Twitter, sharing an image of the banners, “antisemitism continues to plague our communities and it’s important to understand just how severe this issue is.”

So in other words, yes, we know that these signs warning the public of Jewish power are protected by the U.S. Constitution, which is why we need to pass unconstitutional ‘hate crime laws’ to ensure that the American public is never made aware of  just how powerful we Jews have become — and how we are using that power to destroy Christian America and rebuild it in our own image — tikkun olam.

Notice that none of the Jewish groups cited in this article deny the charges that Jews are attempting to foment a race war in America — all they can say is that the charges are ‘antisemitic’, whatever that means.

They don’t deny it because it’s true — without George Soros pouring tens of millions into BLM activities and the election of radical District Attorneys who fully support the race rioters and Antifa, without Jewish leadership of BLM, and without the complicit Jewish-dominated media providing racial outrage propaganda 24/7, there would not be continuous race rioting in every major city in America.

Fomenting racial tensions is how Jews have been subverting and destroying White Christian nations for the last 100 years.

It was communist Jews in the 1920s who undermined Black activist Marcus Garvey who advocated that Blacks in America repatriate back to Africa instead of being forced to “integrate” into White-dominated America.

Jews ran the trans-Atlantic slave trade, but when slavery came to an end, the Jews saw how it was to their advantage to keep the freed slaves in America, dividing the country using race as a weapon.

Jews put all their financial resources and media power behind Black communist integrationists such as W.E.B. DuBois and fellow travelers Martin Luther King and Rosa Parks.

By ultimately forcing racial integration on White America — literally at the end of the barrel of the guns of the National Guard — something that the majority of neither Blacks nor Whites wanted — Jewish “progressives” ensured that racial tension would become a permanent and exploitable element to the American political landscape.

Any resistance to this Jewish-contrived “integration” has been mercilessly attacked in their media outlets as knuckle-dragging “racism”.

In the wake of the so-called Civil Rights Movement — and the resultant racial integration — tens of thousands of Whites have been raped, robbed and murdered by Blacks — heinous crimes that the Jewish media downplays or ignores.

And now Jews are throwing all their political and financial power behind ‘hate crime’ laws that will protect them from the danger of Americans ever waking up to their ongoing and accelerating un-American activities.