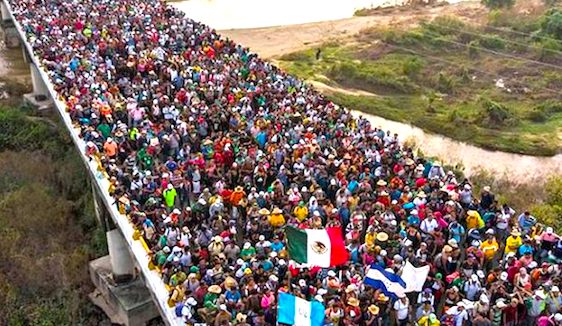 The jewish ADL (Anti-Defamation League) and the Mexican Foreign Ministry signed an agreement to work together to allegedly protect Mexican nationals living illegally in the United States who are “victims of discrimination, bigotry, bullying and hate crimes,” the organization announced Wednesday:

The memo penned by the ADL and Mexico is part of a two-year partnership combatting an increase in hate crimes and discrimination against Mexican nationals and immigrants living in America.

“One of the great priorities for the government of Mexico is to protect the human rights of its nationals abroad, especially backing them against hate crimes,” said Undersecretary Seade. “We are deeply committed to improve the consular assistance and protection given to the Mexican communities in the United States, which we will achieve through strategic partnerships such as the one we reaffirm today with ADL”.

As part of the alliance, the ADL and the Mexican Foreign Ministry will launch “#DenunciaElOdio,” a social media campaign to raise awareness among the Hispanic community in the U.S. on the importance of identifying and reporting hate crimes.

The ADL says it has trained more than 300 consular officers in 20 Mexican consulates across 16 states, since 2018, on how to respond to reports of hate crimes.

So a private “American” so-called “civil rights” group can legally sign an agreement with a foreign country that essentially helps migrants who enter this country illegally fight the American government when it tries to deport them.  And this treachery and subversion is done under the guise of “combating hate”.  If we didn’t live under a Zionist-occupied government, the ADL would immediately be investigated and prosecuted for espionage, resulting in their leadership jailed for treason.  Instead, it will be business as usual, the the migrant flood will continue.

Open borders are essential to destroying this country and its Christian culture, but that’s not enough for these nation-wreckers.  They also have to have a legal team in place that will offer free legal assistance to these illegal invaders so that they can drag out their deportation orders for years.  In the meantime, their children go to our schools, our hospitals, and colleges, all paid for by the White American middle class workers.  And by the time the courts confirm the deportation orders, these illegals will have become members of the U.S. Congress and other “leadership” positions.