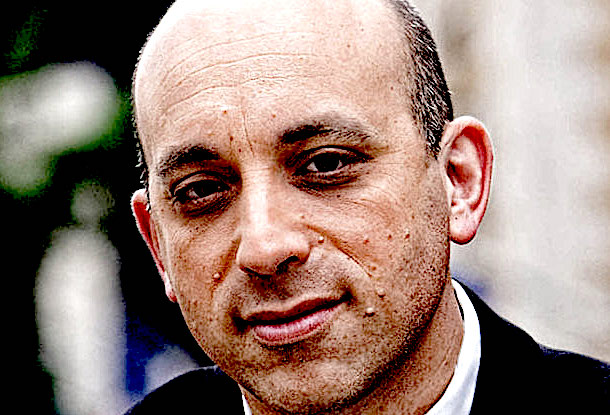 Jonathan Greenblatt, chief executive of the Anti-Defamation League, a Jewish supremacist and self-interest group, expressed support of the Black and Antifa rioters burning down America’s cities as a ‘justifiable’ response to a case of apparent police brutality:

[He stated], “We stand in solidarity with the black community as they yet again are subject to pain and suffering at the hands of a racist and unjust system.”

He added: “As an organization committed to fighting all forms of hate, we know that this brutal death follows an explosion of racist murders and hate crimes across the US.

“As an agency that has stood for justice and fair treatment to all since our founding in 1913, we know that this has occurred at a time when communities of colour have been reeling from the disproportionate health impacts and economic consequences of the coronavirus pandemic.

Sheila Katz, executive director of the National Council of Jewish Women, said: ‘’We will not remain silent. As a national organization made up of over 100,000 advocates in communities around the country — including Minnesota — we are outraged and devastated by the murder of George Floyd.

“Mr Floyd was murdered by multiple police officers who held him down with their knees, however, the underlying cause of his death is systemic racism. It is both unacceptable and exhausting that in 2020, we still need to insist over and over again: Black Lives Matter.’’

Meanwhile Keshet, a group that advocates for LGBTQ Jews, expressed solidarity with black leaders, adding: “For the past two days, the Jewish community observed Shavuot, a holiday rooted in learning and action that commemorates when the Jewish people were given the Torah.

“The Talmud teaches that anyone who destroys one life has destroyed an entire universe. The systemic racism that allows black people to be murdered with impunity is destroying our world.’’

Officer Derek Chauvin has subsequently been charged with second-degree murder after he was shown in footage kneeling on 46-year-old Mr Floyd’s neck on Monday.

He and three other officers have been sacked.

Canter’s Deli, the decades-old Jewish deli in the heart of Los Angeles Fairfax district, posted on Instagram that they supported the Black Lives Matter movement, and that they would be leaving out bottles of water for protesters.

But the business, as well as others on the block, was vandalized.

A synagogue in the Fairfax District was vandalized with graffiti that read “Free Palestine. F— Israel,” on a day marked by police protests, vandalism and looting in the area.

Last Friday, American President Donald Trump openly attacked the Mayor of Minneapolis Jacob Frey, who is Jewish, over his failure to stem rioting in the city.

The President wrote that he would “send in the National Guard” to handle the violence, unless “the very weak Radical Left Mayor, Jacob Frey, get his act together and bring the City under control.’’

He described him as showing “a total lack of leadership.”

Mayor Frey, who attends two Reform synagogues in the city, had previously clashed with President Trump over the cost his security trusts – and said he had received antisemitic messages from right-wing extremists as a result.

He grew up in Oakton, Virginia, in a Reform Jewish household and once said: “The moral imperative outlined by Tikkun Olam is something I believe in strongly and is foundational both to Judaism but also my philosophy in government.”

Yes, stoking race riots with incendiary Marxist slogans of impossible ‘equality’ is all part of Judaism’s “tikkun olam” or “healing the world”.

In order to “heal the world,” Jews first need to destroy it completely, and then rebuild it in their own image — and if you don’t know what that looks like, ask the 60 million dead Christians in the former Soviet Union.

Ask the Palestinians whom the Israelis use for live target practice — but when they protest Israeli brutality, the IDF rolls out the tanks and pounds them into submission — that’s coming to America for anyone who dares object to our new overlords.

The ADL does not care at all about George Floyd’s death — rather they see it as another opportunity to further their own agenda of Jewish racial and social supremacy by firmly muzzling White America’s opposition to their own destruction in the name of “equality”.

Blacks and other radicals are merely “useful idiots” in this game, and once Jews achieve unrivaled political power, these minority groups will be crushed mercilessly just as they were by the Bolsheviks in Russia.

“If you want a picture of the future, imagine a boot stamping on a human face—for ever.”
―George Orwell, 1984