ADL Survey: The ‘Most Antisemitic’ Countries In Europe Are Also The Whitest, Most Christian, and Safest 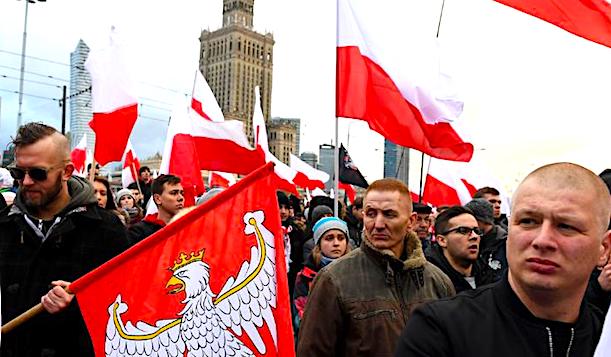 About one in four Europeans hold anti-Semitic beliefs, with such attitudes on the rise in eastern countries and mostly steady in the west, according to a survey conducted by the Anti-Defamation League, an international jewish supremacist organization:

The poll of 14 European countries, done for the New York-based Anti-Defamation League, found anti-Semitic attitudes most prevalent in Poland, where such sentiment rose to 48% of the population from 37% in 2015, and Ukraine, where the rise was even greater— to 46% from 32% in 2016. Anti-Semitic views in Hungary were little changed but remained high, increasing from 40% to 42%.

The governments of all three countries have been criticized by Jewish groups recently, though all deny being anti-Semitic.

…In early 2018, Poland saw an explosion of anti-Semitic language in public life — expressed on public television and even by public officials — after the conservative, nationalist ruling party passed legislation banning certain kinds of Holocaust speech, which was seen in Israel as an attempt to whitewash the participation of some Poles in the Holocaust.

In Western Europe, the study found that anti-Semitic views were either stable or down, with decreases in Britain, Spain, Netherlands, Italy, Germany and Austria. Denmark saw an increase from 8% with anti-Semitic views to 10%, Belgium from 21% to 24%, while France was unchanged at 17% and Sweden had the lowest rate, at 4%.

The survey, conducted between April 15 and June 3 with a margin of error of plus or minus 4.4%, comes at a time of growing concern over anti-Semitic attacks in Europe.

But the findings on attitudes don’t necessarily correlate with violence, with attacks rare in Hungary and Poland, for example, but up 10% last year in Germany and also 10% in Britain in the first six months of 2019 according to studies.

They focused primarily on long-held anti-Semitic tropes such as the Jews’ influence global finance and the media — prejudices that have been instrumentalized by the Nazis and others to incite hatred.

Jewish influence in the business world was a widely accepted view in eastern Europe, with 72% of Ukrainians, 71% of Hungarians, 56% of Poles and 50% of Russians agreeing that Jews have too much power.

In Western Europe, the belief that Jews are more loyal to Israel than their home country was the most common anti-Semitic view, ranging from 32% of respondents in France to 62% in Spain.

Nearly half of Germans and Austrians — 42% and 44%, respectively — said Jews talk too much about what happened to them in the Holocaust, compared to 15% in Sweden and 18% in Britain with that view.

Amid concerns that some of the more than 1 million migrants that have flooded into Europe since 2015, primarily from the Mideast, might import anti-Semitic attitudes with them, the study also looked specifically at Muslim attitudes toward Jews in six Western European countries.

The survey found that the attitudes of Muslims in Belgium, France, Germany, Italy, Spain and Britain tended to be more anti-Semitic than those countries overall. At the same time, they were much more likely to have interacted with Jews, and to have higher opinions of Israel, than Muslims in the Mideast and North Africa.

The Jews spend millions each year conducting surveys to find out just how much they are hated around the world, especially in White countries where their anti-White, anti-Christian propaganda and subversive activities are focused.

These surveys want you to believe that there is some kind of correlation between ‘antisemitism’ and physical violence toward Jews, but this survey admits that no such correlation exists, as the most ‘antisemitic’ countries are also the safest for Jews, and for non-Jews for that matter.

Which begs the question: if highly antisemitic countries like Poland aren’t dangerous for Jews, then what’s the problem with antisemtism?  If these numbers are correct, the more antisemitic a country is, the safer it is for Jews.

Or does this survey merely show the obvious fact that the Whiter the country, the more Christian the country and the safer the country is for everyone?  Only Jews would waste millions of dollars to prove this obvious reality.