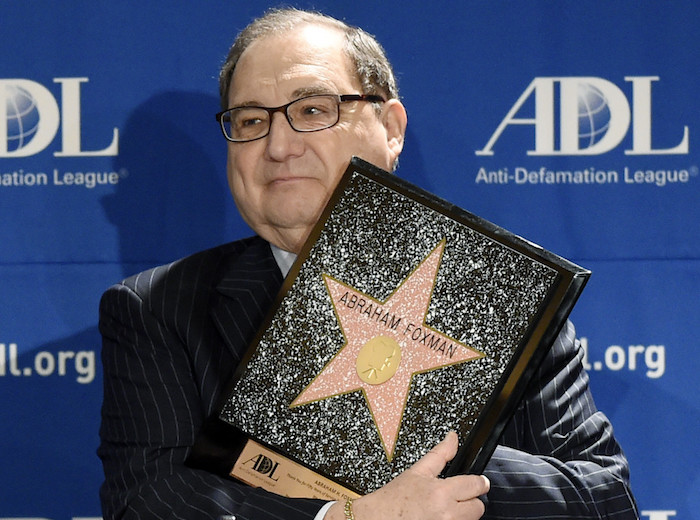 Abe Foxman, the former head of the jewish supremacy watch dog group, the Anti-Defamation League, claims that President Trump contributed to the “climate” that resulted in the Pittsburgh synagogue shooting but stops short of smearing him as an “antisemite”:

I’ve known [Abe Foxman] for many years.  Speaking to him on Tuesday, with the Shabbat massacre in Pittsburgh raw and horrifying, hours ahead of the first funerals, I’ve never seen him so distraught. “Shocked but not surprised,” as he put it.

We talked over the breakfast table at the King David Hotel, in the safe haven that is Jerusalem — about the hatred that never died, the disintegration of the “containment” barriers against anti-Semitism that he spent his life working to build, and the role of the American president in the emboldening of haters and anti-Semites.

Foxman, 78, stresses that anti-Semitism has “always been there” in America. He stresses, too, that Donald Trump is not an anti-Semite. But, says Foxman, carefully and fiercely, “he is part of the problem.”

“Pittsburgh is not Trump. It’s also Trump,” he says. By this, he explains, he means that a consequence of Trump’s ideology, unforeseen by the president, is the triggering of bigotry and the emboldening of extremists like Pittsburgh killer Robert Bowers. “I don’t think he sees it. I don’t think he understands it,” says Foxman of Trump.

“And so now, when it happens” in Pittsburgh, and people point a finger of blame at Trump, “he’s screaming bloody murder. Me? I have a Jewish daughter. I have Jewish grandchildren. Look what I did for Israel.”

Foxman says he’s still an optimist. He says that he has no right not to be when he survived the war, and a million and a half children didn’t. But that it’s getting tougher. The “firewall” painstakingly constructed over decades against hate-fueled violence, and worse, is disintegrating, he says. “Never again” was never a promise, he muses dismally now. It was a hope.

And he wants Trump, in Pittsburgh, to say what? Foxman pauses, then replies: “That the language of divide and conquer will undermine who we are — our safety, our democracy, our freedom. That words are serious. That I understand that words unintended can have very dangerous consequences — as happened in Pittsburgh… That people use these words and abuse them, and I will now respect those words because I know they have consequences. He’s capable of that.”

But for all his determined optimism, Foxman plainly doubts it. “He’s a demagogue,” he repeats several times of the president.

Irony of ironies, this interview with Foxman was conducted at the King David Hotel in Jerusalem, which was bombed in 1946 by the Irgun, a jewish terror gang, killing 91 innocent people.  Instead of being arrested and executed for this horrifying act of terrorism, the leader of the Irgun, Menachem Begin, was celebrated and went on to become the Prime Minister of Israel.  And like Begin, Abe Foxman is a rabid zionist agent who worked for years furthering the interests of the State of Israel by terrorizing  anyone who dares criticize Israel or Jews in general.

That said, Foxman here reveals something important about the jewish agenda — that it is closely tied to the defense and spread of so-called “democracy”.  The spread of “democracy” is really the guise under which the world is brought to heel under the jewish revolutionary spirit, as author E. Michael Jones would assert.  Even Thomas Jefferson observed that democracy always ends up as totalitarianism, which is why Jews are such staunch advocates of it.  And if you want to see what the ultimate version of jewish democracy is, you need look no further than the homicidal authoritarianism of the former Soviet Union, where “antisemitism” was a capital offense.