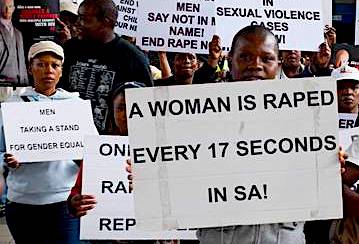 It would be fair to say that there is a rape epidemic in South Africa, with surveys showing that almost 40% of Blacks admitted to raping a woman, and 50% of all Black women will be raped in their lifetimes, which shouldn’t be all that surprising considering that only 1 in 500 reported rapes ever result in a conviction.

So in order to help these men better understand how not to get themselves into situations where they are at “high risk” of raping a women, an advice column appeared in a Namibian magazine which listed some common sense rules for prospect rapists to follow:

Ten tips on the list address some of the most common ways women are assaulted, attacked or drugged and aims to prove a point that rape is the direct result of the perpetrator performing such actions. The list therefore shifts responsibility from the victim to the perpetrator.

A number of everyday activities women do and places they go are mentioned in the tips followed by the words, “remember not to rape her” or “don’t rape her”, “leave her alone”.

These everyday actions paired with a seemingly casual reminder not to rape women serve as a commentary on how easy it seems to be for men to take advantage of women and ultimately rape them.

The magazine is asking women to share the tips far and wide as it may help save someone’s life.

Unless you have lived around Black Africans in their native environment, or read extensively about what life is really like for them, you might be tempted to dismiss this article as a satire, as some sort of lampoon, but it is very real.  Adult African men are often no more mentally sophisticated than young children — if they want something, they simply take it without thinking about the consequences.  And three hundred years of European influence has made very little lasting impact on their behavior.

Blacks in Africa hate Whites not because Whites actually “oppress” them, but rather because the presence of Whites is a constant reminder to them of what abject failures they have been, and how dependent they have become on Whites for any semblance of civilization.  And instead of just admitting the truth and appreciating Whites for what they have done for Blacks, they would prefer to see them dead, even if that means they completely revert to the Stone Age of their recent ancestors.