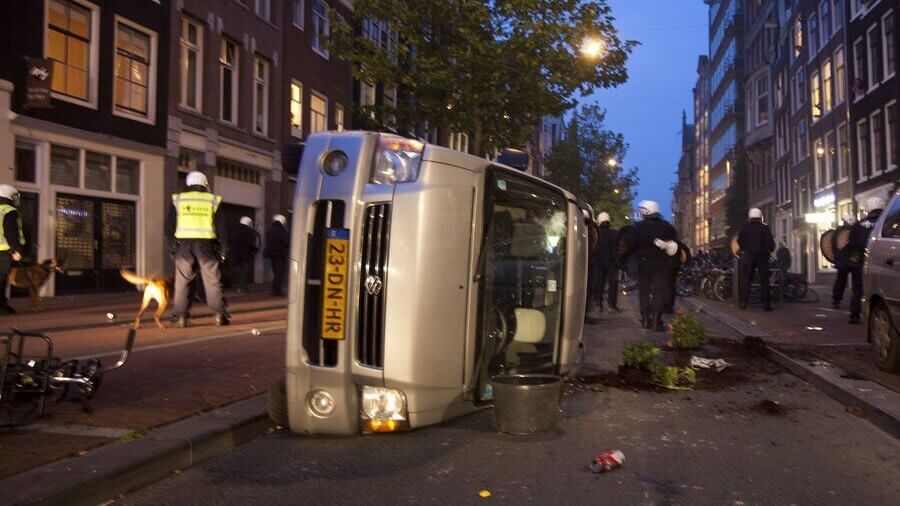 We have yet another example of the downward turn a once great European country has taken after it is flooded with non-White immigrants with Amsterdam:

As dark descends on Amsterdam, the Dutch tourist hotspot turns into an “urban jungle” where the police are powerless to handle crime, violence and drug trade, Arre Zuurmond, the city’s ombudsman, warned.

“The city center becomes an urban jungle at night,” Zuurmond told Dutch paper, Trouw. “Criminal money flourishes, there is no authority and the police can no longer handle the situation.”

Drugs are being sold openly in the streets, pedestrian areas are used for car and bike races, there’s widespread theft and other offenses, the ombudsman said, using the world “mayhem” to describe what’s happening in the city.

Earlier, Zuurmond set up three CCTV cameras at the busy Leidseplein square ringed by bars and clubs, which is located in the south western part of the city center. The facts exposed as a result of his surveillance experiment turned out to be quite depressing.

“One night we counted 900 offences, mainly between the hours of 2:00am and 4:00am. The atmosphere is grim, and there is an air of lawlessness,” the ombudsman told Trouw. “Scooters race through the pedestrian areas. There is a lot of shouting. Drugs are being bought. There is stealing,” he said, adding that police often do not even try to intervene.

“There is violence but no action. You can even pee on the van of a mobile [police] unit and the driver won’t say anything,” Zuurmond said. He also described the situation at the square at night as “intolerable lack of authority.”

Notice that this article does not specifically mention the racial aspect of this crime wave, but that’s exactly what it is.

Amsterdam is the Las Vegas of Europe with legalized prostitution and marijuana. Perhaps that type of liberalism was manageable when the country was 99% White, but that kind of vice attracts non-Whites like moths to a flame.

Authorities will eventually have no choice but to make prostitution illegal again to curb the associated crime–but that won’t solve the problem because it will still thrive on the black market.

The Arabs and Blacks need to be removed from the country if it has any hope of surviving.