After Making Millions Off Author Roald Dahl, His Own Family Throws Him Under The Bus For ‘Incomphrensible’ Antisemitism 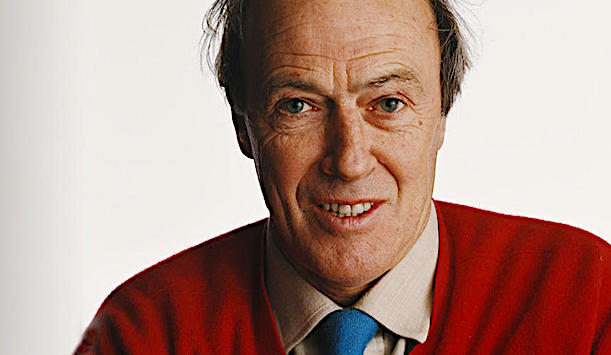 Jews in Hollywood and publishing have made — and continue to make — billions of dollars off the beloved works of British children’s author, Roald Dahl, yet they are now taking a public apology by his ungrateful family for some “politically-incorrect” comments he made over his lifetime to throw him under the bus and drag his reputation through the mud because he dared to make critical — and well-deserved — comments about some Jews:

Over 30 years after his death, the estate of Roald Dahl issued a quiet apology Saturday for the “prejudiced” anti-Semitic positions the celebrated children’s author had regularly expressed, calling them “incomprehensible.”

“The Dahl family and the Roald Dahl Story Company deeply apologize for the lasting and understandable hurt caused by some of Roald Dahl’s statements,” read a brief statement on the official Roald Dahl website that was not publicized to news outlets or Jewish groups.

“Those prejudiced remarks are incomprehensible to us and stand in marked contrast to the man we knew and to the values at the heart of Roald Dahl’s stories, which have positively impacted young people for generations,” the statement said.

In a statement to the UK’s Sunday Times on Sunday, the Dahl family explained: “Apologizing for the words of a much-loved grandparent is a challenging thing to do, but made more difficult when the words are so hurtful to an entire community.

“We loved Roald, but we passionately disagree with his anti-Semitic comments,’ they added.

The debate over Dahl’s anti-Semitic legacy hit mainstream Hollywood in 2016 upon the release of the Steven Spielberg version of “The BFG.” At a Cannes Film Festival press conference, the Jewish director said he “wasn’t aware of any of Roald Dahl’s personal stories” before shooting “The BFG” for Walt Disney Pictures.

“I was focused on the story [Dahl] wrote,” said Spielberg, the creator of “Schindler’s List” and founder of the Shoah Foundation. “I had no idea of anything that was purportedly assigned to him, that he might have said,” Spielberg told journalists in Cannes.

Several instances in which Dahl describes himself as anti-Semitic have been reported, including a 1990 interview in UK’s The Independent a few months prior to his death.

“I’m certainly anti-Israeli and I’ve become anti-Semitic in as much as that you get a Jewish person in another country like England strongly supporting Zionism. I think they should see both sides. It’s the same old thing: we all know about Jews and the rest of it,” he said.

He also made multiple comments that included anti-Jewish racism.

“There aren’t any non-Jewish publishers anywhere, they control the media – jolly clever thing to do – that’s why the president of the United States has to sell all this stuff to Israel,” said Dahl in 1990 in response to the Lebanon War.

In an interview with the New Statesman magazine in 1983, Dahl said: “There is a trait in the Jewish character that does provoke animosity… Even a stinker like Hitler didn’t just pick on them for no reason.”

As a decorated RAF pilot in WWII, Dahl risked his life — and nearly lost it when he was shot down — to defend world Jewry and help defeat the sworn enemy of the Jews.

He then worked in British intelligence, stationed in the U.S., to undermine the patriotic America First Movement — led by the antisemite Charles Lindbergh — who wanted to keep America out of the war with Germany — again, benefiting Jewry.

After the war, Dahl became a successful and celebrated author, enriching the Jewish publishers that promoted his books.

Dahl also worked as a screenwriter for Jewish movie and television companies — and his best-selling books were made into successful movies which made untold millions for the Jews in that industry.

And during all that time, Dahl never “hid” who he was or his opinions — the Jews knew that Dahl held “antisemitic” opinions, just like the vast majority of people of his generation, and yet they did business with him anyway.

Because deep down inside, Jews know exactly what the “gentiles” think of them — but they just don’t care — if Jews were truly “offended” by antisemitism, they wouldn’t keep coming back to Christian countries after being kicked out 109 times.

If Dahl’s pedestrian “antisemitism” truly offended Jews — and “hurt” their “feelings” — they should have refused to have anything to do with him — but there was a lot of money to be made off Dahl, and they were literally willing to look the other way.

And Dahl’s family has raked in untold millions off of his estate since his death — and if they truly reject his “incomprehensible”  antisemitism, racism, and misogyny, they would reject any money from his “tainted” estate — but of course they hypocritically continue to take the money, but throw Dahl under the bus — instead of defending him and his opinions.

None of these hypocritical Jews or his degenerate family members ever had a modicum of the talent that Roald Dahl had — by all accounts the man was brilliant in every endeavor he pursued — so they all just tear him down for having the courage to tell the truth that certain people just didn’t want to hear.

And it’s only fitting that Sophie Dahl — Roald Dahl’s granddaughter, the fashion model and “author” — married an Indian-Burmese Jew — one can only imagine what Roald Dahl would have thought of his Jewish great-grandchildren — the inheritors of his fortune — and his worst nightmare, if we are to believe his critics.