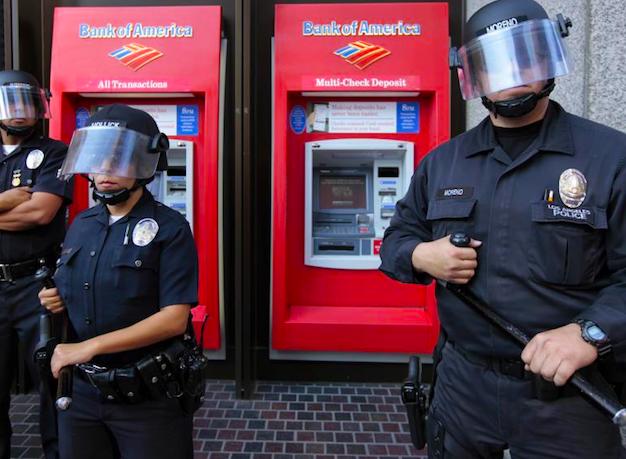 One of the “vibrant” traditions that migrants have brought to the Netherlands is the use of hand grenades and other explosive devices to make unauthorized “cash withdrawls” from ATMs, and this in turn has caused banks to remove many ATMs because of the security risk:

Banks are increasingly removing their ATMs from Dutch streets due to ATM bombings. People living around ATMs fear for their safety. ING bank alone closed 170 out of its total 508 ATMs in the last two years, the Telegraaf reports.

No less than eight of the 10 ATM bombings committed in Amsterdam over the past two months involved ABN Amro ATMs. “Our first priority is to repair the damage. Then we’ll see whether the machine returns”, ABN spokesperson Geert van der Varst said to the newspaper. “We are faced with a dilemma every time. There are local residents who want to get rid of he machine, on the other hand there are residents who would like to keep a point where they can withdraw cash.”

ABN Amro is surprised that its ATMs keep getting targeted. According to the bank, the ATM bombers didn’t get away with any cash in any of the recent bombings. Once there is an explosion, the safe containing the money is blocked.

The number of ATM bombings are on the decrease, according to the newspaper. In 2018 a total of 40 ATMs were blown open, 22 fewer than the year before.

The hypocrisy of the Dutch authorities is in full force on this issue.  This article, of course, fails to mention that violent migrant criminals are behind these ATM bombing, but everybody in the Netherlands knows exactly who is responsible.  Why censor the racial aspect of this story if everyone knows the truth any way?  For fear of being called a “racist”, people may complain that there aren’t any ATMs anymore, but they won’t dare say why.  When you ask uncomfortable questions, people might get their “feelings” hurt.

In order to make a multicultural society function smoothly, everyone must act as if it has always been this way.  The Netherlands was never racially homogeneous, nor is that even a desirable way of looking at the past.  What’s important is today’s diversity is maintained and increased at all costs, and if your kids get mugged by migrants every day at school, or if you can’t find an ATM, that’s all just a small price to pay for the greater good.  What’s a little violence now and then on the road to freedom and equality?