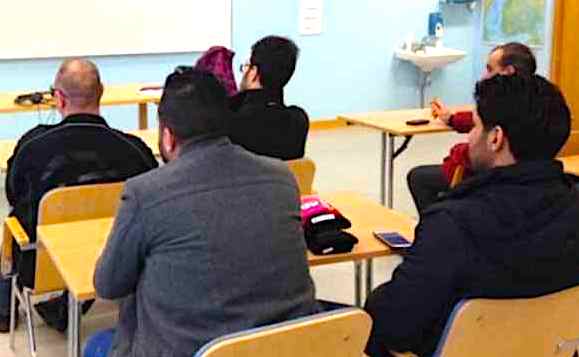 The Finnish municipality of Oulu announced that migrants are no longer allowed to visit schools and daycare centers as part of a social integration program:

The reason is that parents have complained about so-called integration visits and feel worried about their children after the recent rape wave against young girls.

According to the Finnish police, the alleged perpetrators are male migrants who have come to the country in recent years and most of the rape victims are girls under the age of 15.

One of the places the media has highlighted in connection with the rape wave is the municipality of Oulu in North Ostrobothnia. In Oulu, the police are investigating at least ten migrants for serious sexual offenses against girls as young as ten.

As a result, parents have complained and expressed concern about how the municipality can allow the integration project ESIKOTO to continue.

ESIKOTO is an integration experiment where migrants visit schools and daycare centers to learn more about society through lessons and study groups. It is also supposed to promote multiculturalism.

However, now the municipal leadership chooses to meet the parents’ request and end the integration project.

Mika Penttilä, who is responsible for education and culture in the municipality, confirms that they, together with the organisers of the project have decided that there will be no more visits.

Recently, media reports on sexual offenses have also shown new crime statistics in the municipality of Oulu. Arto Karnaranta, Deputy Chief of Police, explains that sexual offenses in only one year – between 2017 and 2018, have increased by 20 percent.

So the way a migrant shows he wants to integrate into Finnish society is to rape underage girls.

These rapes are taking place because the migrants do not fear the penal systems in western Europe.  Whatever life they will experience in a European prison is far better than any life they had back in their home countries.  And once they’ve “paid their debt” to society after a couple years, they’ll be back on the streets to do it all over again.

If Finland didn’t have a generous welfare system, no migrants would be showing up to live there.  It’s not as if arabs feel any kind of particular affinity for Finnish culture.  All they know is that the Finns have free money and houses for them just for showing up, and the Finns feel very virtuous when they give these migrants a free ride.  And this arrangement would work out just fine if these migrants weren’t so rapey.  Even the ultra liberal Finns don’t like their small children raped at school, so maybe it’s best not to try to “integrate” these migrants so much.