Thanks To Non-Stop Jewish Complaints, Carnival In Aalst, Belgium Will Be Even More ‘Antisemitic’ This Year 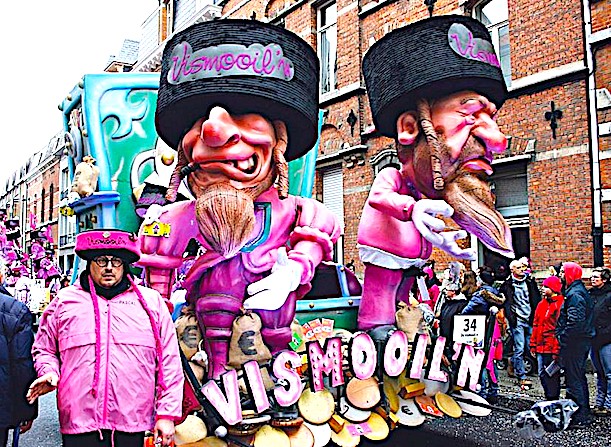 Because of the non-stop jewish kvetching and hand wringing over last year’s parade, the annual carnival in Aalst, Belgium is expected to go as planned on Sunday, with even more antisemitic elements than in previous years:

Aalst’s organizers have sold hundreds of “rabbi kits” for carnival revelers, which take an active part in its parade, to dress up as hassids, which include oversize noses, payot and black hats. This is in addition to the plan to bring back floats similar to the one displayed in 2019, featuring oversized dolls of Jews with rats on their shoulders, holding money.

Foreign Minister Yisrael Katz said on Thursday that “Belgium as a Western democracy should be ashamed to allow such a vitriolic antisemitic display. I call upon the authorities there to condemn and ban this hateful parade in Aalst.”

“We call upon Belgian authorities, including city authorities of Aalst, to change their mind,” Nahshon said. “We still have [time] until the carnival and hope reason will prevail and the antisemitic floats will be taken away.”

If the parade goes as planned, “it will be a moral blot on Belgium,” he added.

“The fight against antisemitism is also an Israeli fight. Israel has to be very clear on the issue,” Nahshon said.

The Aalst carnival lost its place on UNESCO’s Representative List of the Intangible Cultural Heritage of Humanity in late 2019, after the Belgian city’s mayor refused to remove antisemitic imagery from the parade.

This year’s parade is expected to specifically target Jews for mockery because of the controversy and loss of their UNESCO status.

The carnival has long been a site of bigoted displays in general – including participants in blackface and displays mocking Muslims – and usually of specifically antisemitic imagery. In 2013, JTA reported, carnival revelers in Nazi uniforms held canisters labeled “Zyklon B” while walking with other participants dressed as concentration camp prisoners.

While several Belgian officials have spoken out against the parade, no government action has been taken against it. One reason for this is the rise of Vlaams Belang, a far-right populist party with neo-Nazi roots, and a concern that banning the antisemitic floats will play into their hands…

Though Belgium has a large Jewish community, it is not planning any organized demonstrations against the carnival, with one source saying they are worried about calling negative attention to themselves and possibly provoking violence by going against the dominant culture.

In addition, a legal fight against the parade would be a challenge, because according to Belgian law, one can only be indicted for racial incitement if he or she targeted and harmed a specific person.

Earlier this week, three Belgian professors who are experts in antisemitism, Vivian Liska, Didier Pollefeyt and Klaas Smelik, called in a much-quoted op-ed in De Morgen for the media not to display the antisemitic images from the parade in the media.

“We do not want to commit censorship, but we do want to point out the danger of spreading this type of anti-Jewish caricature,” Smelik said on Belgium’s Radio 1. “in the past, it has become apparent what kind of influence they can have on the opinions of ordinary people.”

…In December, Aalst Mayor Christoph D’Haese of the Flemish nationalist N-VA Party argued in December that the parade mocks many different groups and should not be censored.

“We are neither antisemitic nor racist, and anyone who says that is acting in bad faith,” he said.

We mustn’t forget that Jews are the sole arbiters in our societies of what is funny and what is not, which makes them absolutely tone deaf to other people’s humor

In fact, if Jews really don’t like your sense of humor, they will have you thrown in jail just to make an example out of you.

That said, you would be hard pressed to find a less ‘antisemitic’ place on earth than Belgium, and that includes Israel, and there is absolutely no evil intent behind this parade.

The Poles, who know Jews better than any European people, poke fun of them in the same light-hearted way.

And the Jews react to this humor by running around like Chicken Little, claiming the Belgians are about to pick up pitchforks and torches, round up all the innocent Jews, and throw them in ‘gas chambers’ disguised as showers.

The jewish answer to anything they don’t like or approve of is draconian censorship, and if that doesn’t work, endless and expensive — and often frivolous — lawsuits.

It is exactly this kind of knee-jerk intolerance from Jews themselves that creates ‘antisemitism’, that gives their antagonists endless ‘ammunition’ to use against them.

But because they refuse to budge one inch and accept a single iota of responsibility for any ill feelings people have toward them, this endless cycle of blame and recriminations will likely continue for another 2,000 years, or until Jews have amassed enough power to simply send in their Cheka shock troops and silence us with baseball bats:

“If [the Jews] had the power to do to us what we are able to do to them, not one of us would live for an hour. But since they lack the power to do this publicly, they remain our daily murderers and bloodthirsty foes in their hearts.”
– Martin Luther (1483-1546): “On The Jews and Their Lies”