After Ocasio-Cortez Threatens to Cut Funding to Israel, Mega Donor Wants Her Defeated 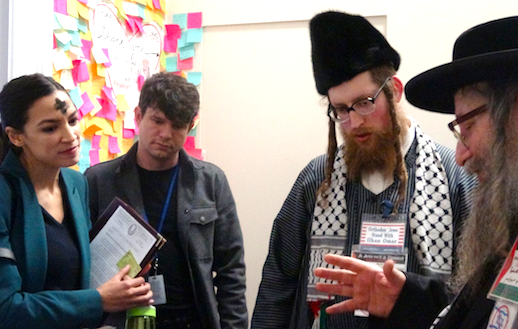 Alexandria Ocasio-Cortez’s surging national profile has inspired a trio of Republican opponents from her home district — along with a multimillionaire mystery donor who could help close the gap in her foes’ long-shot race against her:

Just three months after taking office, the Democratic socialist congresswoman’s challengers include an Egyptian American journalist, who has already tossed her hat in the ring, and an NYPD cop-turned-high school civics teacher and conservative talk radio producer, both of whom are seriously exploring a run against her.

And the fledgling challengers could get help from a wealthy New Yorker committed to backing an Ocasio-Cortez opponent, a GOP big said.

“There’s definitely national energy and money on this race,” Bronx Republican chairman Mike Rendino told The Post, adding that he has been in touch with a mega-bucks donor hell-bent on getting AOC tossed.

Rendino wouldn’t divulge the donor’s name but said the individual is “worth over $200 million, plus [has] connections to raise money in Manhattan.”

“We need to put individuals forward and make the incumbent work for re-election,” Doherty said.

The three potential contenders agree on one thing: They believe Ocasio-Cortez has neglected her district, which encompasses a northeast section of the Bronx including Throgs Neck and Parkchester and a northwest portion of Queens including Jackson Heights and College Point.

It took the congresswoman two months to open a district office in Queens.

“She completely ignores the people in this district,” medical writer Ruth Papazian, 61, told The Post during an interview at the homestyle Italian eatery Patricia’s of Morris Park.

The Jewish media moguls obviously like AOC’s “diversity” and her radical anti-white agenda — and have given her millions of dollars in free publicity since being elected.

No freshman member of Congress — especially with such radical views — has been given such credibility and attention from the media in recent memory.

Clearly the Jews have had to school her on certain issues — such as Israel and antisemitism — but she apparently isn’t all that quick on the uptake.

And, no, this is “mega donor” is not upset about her “neglecting” her voter base in the Bronx — he wants her to quietly shift her views about Israel — and she will.

When it comes to American politics, the term “mega donor” with New York “connections” is a euphemism for “wealthy Jew” such as Sheldon Adelson and Carl Ichan.

And when AOC announced this week that cutting Israel’s aid is “on the table,” the Jews felt she needed a little reminder that she’s going to play ball with them, or she’s going to soon be out of a cushy job and looking for another bar tending gig.

AOC needs to get in better touch with her “inner Jew” which she claims to have — and she needs to stop ruffling so many Jewish feathers, or these Republican contenders in her district will no longer be “long shots” to unseat her.