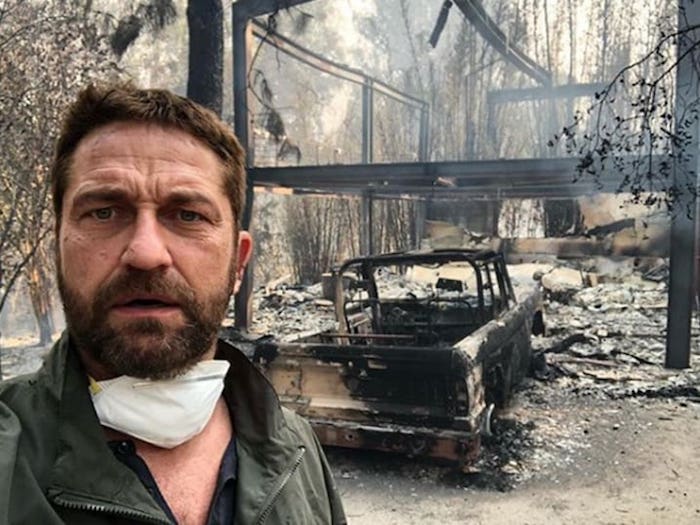 Actor and IDF supporter Gerard Butler’s multi-million dollar Malibu home has been reduced to a pile of ashes by the recent wave of wildfires that have swept through Southern California:

The disaster, which started on November 8 and quickly spread across sections of the state, has already destroyed about 7,000 buildings and devastated more than 42,000 hectares of the western US state of California’s territory.

Forest fires in California have cost thousands of state residents their homes, including the famous Scottish actor Gerard Butler and the Canadian musician Neil Young.

On his Twitter page, Butler posted a photo of the burnt house.

American actor Charlie Sheen earlier announced that his parents had gone missing during an evacuation of the elite seaside community of Malibu because of the wildfires; Martin Sheen later reported that he and his wife were fine.

Earlier it was reported that 31 people had died, including 29 in northern California and two in the south of the state. Another 228 people were reported missing.

If you need any proof that there is a divine order to the universe, this is it — Gerard Butler uses his celebrity status to support a fundraiser for the Israeli Defense Force and its ongoing ethnic cleansing of the Palestinians in Gaza, and within days his million dollar home burns to the ground.   But because Butler does not have the eyes to see what the true significance of what has happened to him, he will merely write if off as “bad luck”.

The same is true for Neil Young whose house also just burned down.  Neil Young recently married the jewish former actress and social justice warrior, Daryl Hannah, but he, too, will fail to connect the dots and understand the cause and effect relationship between the two events.  They may seem to inherit the world, but they will lose their souls — and even their homes — in the process.