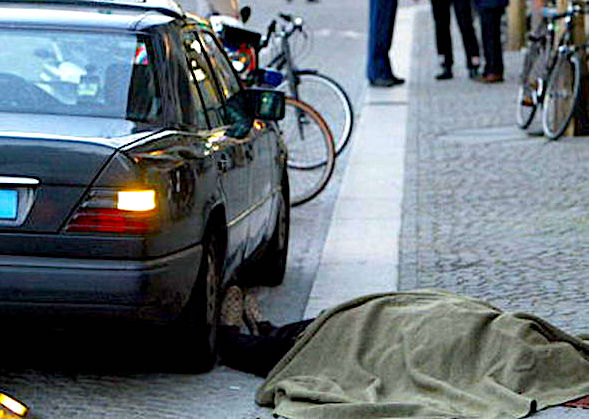 After the recent murder of defense attorney Derk Wiersum, who represented a client involved in violent migrant gang crime, nearly 60 percent of lawyers in the Netherlands feel more unsafe, according to a survey conducdted by the trade journal Advocatenblad:

Wiersum, a 44-year-old father of two, was shot dead while with his wife outside of their home on Imstenrade in the Buitenveldert neighborhood of Amsterdam on September 18th. The authorities currently assume that Wiersum was assassinated because he was representing Nabil B., a crime suspect turned informant. B. was giving testimony since last year against the drug-centered criminal organization allegedly run by Ridouan Taghi. B. linked Taghi to nine separate murders, and a string of attempted murders and never executed murder plans.

58 percent of defense attorneys told Advocatenblad that since Wiersum’s assassination they think more about the risks of their profession. 39 percent have become more careful. They also talk more about the risks involved in their work, not only with colleagues, but also with family and friends. “I have noticed that my immediate environment has become very afraid that something will happen to me“, one respondent said. “In particular, the fact that my 10-year-old son asks me questions about that and wants me to stop doing things in which threats often occur is something that shouldn’t be and that really bothers me.”

The general impression in the professional group is that threats and violence against defense lawyers have increased and intensified over the past five years. A third of the lawyers said that they are taking or considering extra security measures. For example, they’re more selective about clients and hired better security guards for their office. “I now have cameras and I only work by appointment”, one respondent said.

After Wiersum’s assassination, the national coordinator for counter terrorism and security NCTV arranged extra security measures for dozens of people, including prosecutors, lawyers and judges working on the Taghi case. A group of mayors recently warned that these, and other, extra police tasks are taking focus away from investigation work. The fight against human trafficking and a range of other serious crimes is already coming under pressure, they said in a letter to parliament.

Amsterdam has turned into a gangland “Narco State” with drug cartels operating with virtual impunity, and the police don’t have the manpower or firepower to fight these migrant syndicates.  And when they try to fight them, they are accused of “racial profiling”.

Perhaps it would be best for everyone concerned at this point to stop prosecuting drug-related crimes, including murder.  After all, why should a White Dutch attorney risk his life to defend a migrant’s “legal rights” who is accused — and most often guilty — of  committing violent crime in the Netherlands?

The only way that the Netherlands is going to take the country back from these criminals is to further militarize the police force and use unapologetically ruthless power to deal with this scourge, but the smug “progressive” Dutch don’t have the stomach for that.  They’d rather live in fear for their lives than deal with reality.