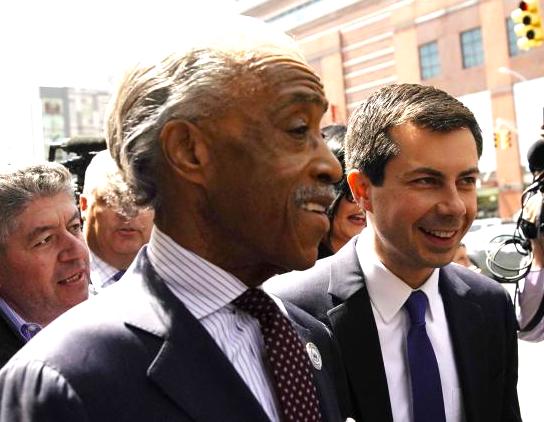 When Pete Buttigieg asked Rev. Al Sharpton for advice on campaigning for president in the South’s Bible Belt as an openly gay white man, the civil rights leader responded, “I think you should say, ‘I am who I am’”:

Buttigieg met Sharpton for lunch at the landmark Harlem soul food restaurant Sylvia’s on Monday to “discuss the need to confront homophobia in the faith community” as well as the South Bend mayor’s “policy agenda for the black community in Indiana and around the country,” according to a campaign statement.

“We need to deal with homophobia in the faith in the black community,” said Sharpton.

In the past month, Buttigieg has clashed with Vice President Mike Pence over his faith and sexuality; faced antigay protestors and hecklers outside of his home and on the campaign trail; and received criticism from evangelical leader Franklin Graham, who said the mayor’s homosexual lifestyle was “not something to be flaunted, praised or politicized.”

“You should be judged on your merits,” Sharpton told Buttigieg, who sat across from him at a table for two. “And we can’t fight against bigotry based on race and we’re going to be bigots based on sexual orientation.”

Sharpton suggested Buttigieg put the black LGBT community “on the table,” particularly when the mayor returns to campaign in South Carolina next month.

Buttigieg laid out his agenda for black voters, which he said “focuses on homeownership, entrepreneurship, health, education, and criminal justice.” But he also touched on issues that have given black voters pause. Buttigieg talked about his firing of South Bend’s first African-American police chief, a decision he said still “stings” with the black community. Later in front of reporters, Buttigieg reiterated his opposition to giving incarcerated felons the right to vote.

While “Mayor Pete” has risen to national prominence and has become a factor in the crowded Democratic presidential field, South Bend’s black residents have expressed lukewarm attitudes toward him and he still has a long way to go to win over black voters across the country. Perhaps in an attempt to make up that ground, Buttigieg has now met twice in one month with Sharpton, who called him “very much authentic” and “firm in who he was and what he represented.”

In early April, Buttigieg and other Democratic hopefuls spoke at Sharpton’s National Action Network annual conference. It was there that Buttigieg called for abolishing the death penalty and said he would sign a bill to commission a study on reparations for descendants of slaves.

It’s hard to believe for a second that race hustler Al Sharpton would have any interest whatsoever in a Pete Buttigieg presidency, aside from vague promises that Buttigieg will promote government cash payouts to any and all Blacks who can somehow prove they are descendants of slaves in America.  Of course, all Blacks in America are descendants of slaves who lived in Africa, but Africa is broke, and there is zero chance that any African nation is going to pay its citizens “reparations” because virtually all Black tribal chiefs were involved in the Black colonial slave trade.

That being said, there will be an extremely low Black turn out in the 2020 election for the Democrats, as none of them, including Kamala Harris, won’t appeal to Blacks in any significant way.  And certainly no Black male is ever going to admit to anyone in Harlem or any other ghetto neighborhood in America that he was going to vote for the little “gay cracker” from South Bend, even with Sharpton’s unlikely nod.  And without the Black vote, Buttigieg has no chance for the Democratic nomination.