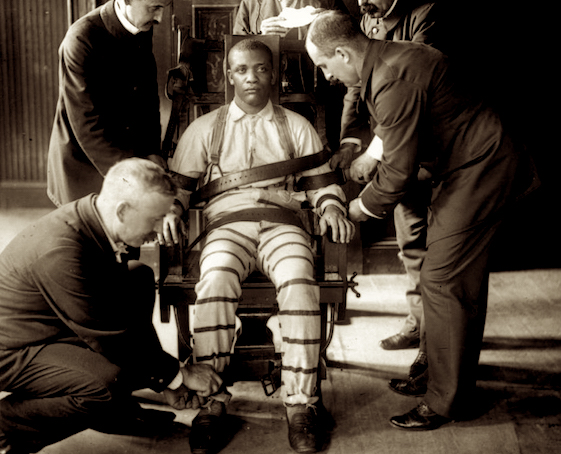 Women should have the right to kill their “unloved” babies because they’d end up going “to the electric chair” anyway, Black Alabama Rep. John Rogers argued, in a state debate on a proposed law on abortion:

Speaking out in the State House against an abortion ban just before his fellow lawmakers overwhelmingly passed the ‘Human Life Protection Act’ that would criminalize nearly all abortions in the state of Alabama, Rogers defended the right of a woman to the procedure.

“You bring them into the world unwanted, unloved, and then you send them to the electric chair,” he said. “So you kill them now or you kill them later, but the bottom line is I don’t think we should be making that decision.”

Republican lawmakers slammed the comments as “horrific”,“abhorrent and callous,” and seized the opportunity to attack their Democratic opponents over the contentious issue.

“One of the most horrific statements I’ve ever heard coming from a Democratic representative on abortion. The barbaric embrace of murder from the Dems is despicable. Every life is precious & worth fighting for,” Alabama Congressman Bradley Byrne tweeted.

…Rep. Rogers’ comments, heard during the two-hour emotional debate on the controversial issue, did nothing to affect the passage of the bill in the state’s Republican-dominated House of Representatives. Calling the bill extreme and fiscally irresponsible, the Democrats simply walked out from the vote allowing the House Bill 314 to pass 74-3…

The legislature, which now heads to the State Senate would make it a felony to conduct early termination at any stage of a pregnancy unless a woman’s life is threatened.

It seems that Blacks can’t make their minds up about abortion; one week denying Black women the “right” to abort their own children is another “form of slavery“, and the next week abortion will save having to send “unloved” Black violent criminals to the “electric chair”.  Of course, it is not poverty and the lack of “motherly love” that turns Black boys into violent muderers and rapists, but let’s not let the facts get in the way of politicizing abortion to garner more votes for the liberals.

If we have learned anything from today’s identity politics, it’s that everyone has the “right” to live by their own laws, much like the Jews teach for themselves in their Talmud.  Blacks are disproportionately handicapped when they have to follow the laws and rules of the White man, and therefore should be exempt from the ones they don’t like, like restrictions on certain forms of birth control such as abortion, paying their way on public transportation, and even petty crime.  Blacks are special, and if they want their sons to avoid the electric chair by being aborted, why do “conservatives” have a problem with this?