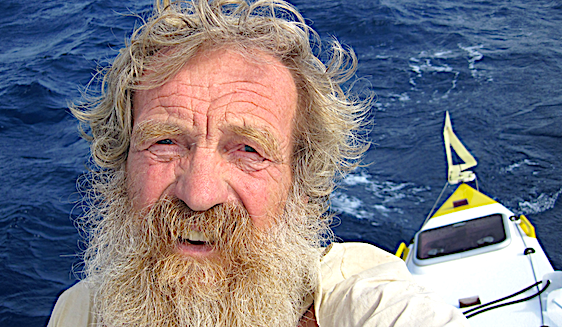 Aleksander Doba, a Polish traveler, adventurer, and world record holder who — in his 60s — became the first person to kayak unaided across the Atlantic and set the world record for the longest open-water kayaking expedition, has died while climbing Mount Kilimanjaro:

The 74-year-old – once named by National Geographic as its Adventurer of the Year – had been “fulfilling his dream” by climbing the world’s highest single free-standing mountain, according to a Facebook post by his family on Tuesday.

Doba reportedly reached the summit of Kilimanjaro, Africa’s highest peak at 5,885 metres (19,341 feet), at around 11 a.m. on Monday morning and asked for a moment’s pause before taking a photo. He then fell unconscious and could not be resuscitated.

Doba, who was born in 1946 in Swarzęd near the western Polish city of Poznań, was best known for his long voyages by canoe. In 2010, at 65 years of age, he became the world’s first person to kayak across the Atlantic Ocean relying solely on muscle power (previous efforts by others had been aided by sails).

The almost 99-day-long solo journey across the narrowest point of the Atlantic, from Senegal to Brazil, set the world record for the longest open-water kayaking expedition in history.

Three years later, the intrepid traveller then paddled 12,427 kilometres across the widest point of the Atlantic from Portugal to Florida. He repeated the feat again in 2017, this time travelling eastward from New Jersey to France.

“The First Transatlantic Kayak Expedition was to check myself and my kayak,” Doba told National Geographic in 2014, when he was named Adventurer of the Year. “The second trip was to raise the bar.”

“I have two sons and two granddaughters. I hope they will learn not to be afraid to dream, turn dreams into plans, and bring plans to reality,” he added.

Doba also circled the Baltic Sea and Lake Baikal in Russia in a canoe and was the first to swim the entire Polish coast – between the towns of Police and Elbląg – as well as diagonally across the country – from Przemyśl to Świnoujście. He also completed 14 parachute jumps, piloted gliders, and held a marine yacht skipper certificate.

He was awarded Poland’s Knight’s Cross of the Order of Polonia Restituta in 2015, then the Medal of the Centenary of Regained Independence three years later.

According to fellow travellers, during Monday’s climb to the summit of Kilimanjaro he said he was in good form, and not showing any symptoms of altitude sickness. He would shout “wild Africa!” to those passing him, reports Polsat News. Doba is suspected to have died from a heart attack, but the cause of death has not yet been confirmed.

Some of his final social media posts from earlier this month show him ice swimming – a trend known as “morsowanie” (walrusing) that has become increasingly popular in Poland this winter – in Głębokie Lake near the northwestern city of Szczecin.

Lest we forget, consumed by the cares of the world, we can be an inspiration to others, no matter what our age….

“And I think now, that in life you should take advantage of everything you have and do the best you can. You have only one life.”