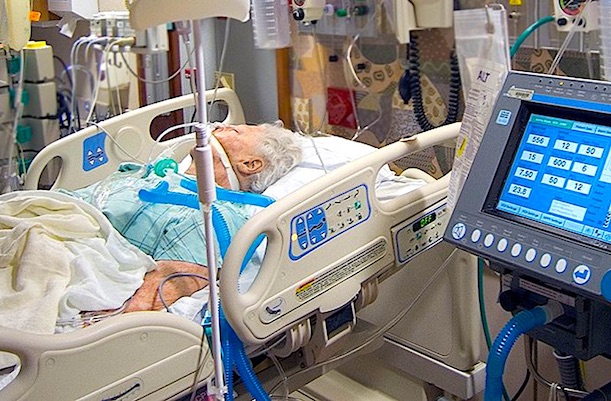 Ofer Merin, a hospital chief at Shaare Zedek Medical Center in Jerusalem admitted that most COVID-19 patients who died at his institution had only around a year’s life expectancy anyway:

“Coronavirus was the thing that tipped them over, but to be honest, for most of these patients who died here in Shaare Zedek, the chance is they had a year of life expectancy, not much more,” said Ofer Merin.

Around 1 in 10 Israelis who have died from coronavirus succumbed at Shaare Zedek Medical Center in Jerusalem, where Merin is director-general. Almost all of the institution’s fatalities were both elderly and had other diseases, he told The Times of Israel.

“Most of the patients who died would maybe be alive now, but coronavirus didn’t affect them in a different way than flu,” he said, drawing a parallel between COVID-19 and common influenza as diseases whose fatalities are mostly elderly people with preexisting conditions.

“We did not lose a single patient who was a healthy young person,” he commented.

The current coronavirus death count in Israel is 278, and the Health Ministry has provided age profiles for the first 237 fatalities. There were two people in their thirties, three in their forties, seven in their fifties, and 23 in their sixties. The rest were aged 70 or older, and the average age of the entire group was 81.3. The data did not include details of preexisting conditions.

At Sheba Medical Center in Ramat Gan, chief medical officer Eyal Zimlichman also reported a high incidence of other illnesses in patients who have died from COVID-19.

“The vast majority had preexisting conditions, more than 95%,” he told The Times of Israel, adding that the average age of death in his hospital’s coronavirus wards has been 75 to 80. Zimlichman said he couldn’t estimate the life expectancy of patients who died.

The doctors’ comments come amid growing debate over whether Israel has handled the coronavirus crisis well, or overreacted.

What happened in this Israeli hospital is a microcosm of what has happened worldwide with COVID-19.

Despite the pathetic attempts to characterize this seasonal flu as a killer “pandemic”, the vast majority of people who died averaged around 80 years old and had many pre-existing and life-threatening conditions, all of which were blamed on the coronavirus.

And the docile, television- and smart-phone addicted public suspended their common sense and believed what they were told by an army of inept bureaucrats who contradicted themselves at every turn.

They literally turned a normal flu season into a “global pandemic” with smoke and mirrors — and at the same time transformed fear into a virtue.

It was a major set toward achieving “globalization”, their euphemism for global Bolshevism.

The economies of the First World White nations must be brought to their knees, down to the level of the Third World.

We just witnessed one of the greatest wealth and power transfers in the history of the world, and once the dust settles we’ll finally see just how radically our money has been devalued through hyper-inflation — on purpose.

And whatever “rights” we foolishly conceded to our government in order to “keep us safe” are gone — we won’t be getting them back.

They are already predicting the next “pandemic” — and they know it’s coming because their COVID-19 vaccines are going to cause it.