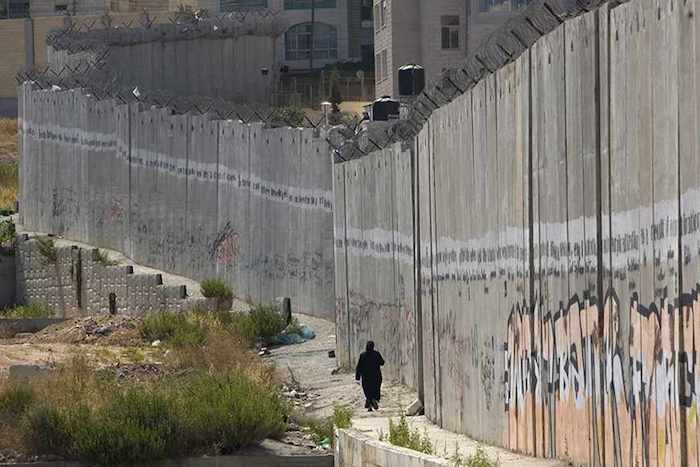 Three young American Jews were reportedly kicked off their free trip to Israel sponsored by the pro-Israel Birthright program because they asked questions about the apartheid separation wall Israel has erected on occupied Palestinian territory:

Shira Leah reports that she and two others were kicked off Birthright, “because when we drove past the border separation wall between Israel and the West Bank (which our tour guide had ignored all 4 times we drove past it), we tried to ask questions about it and didn’t accept his answer that the entire conflict is caused by crazy violent Palestinians.”

In the accompanying video, young people are heard to discuss signing a waiver to end their trip with a Birthright official in a tense conversation.

That official says to a young man: “I was more than willing to have a conversation with you… Then you came at me with the nineteen-year-old’s feeling this way and that way…. The program is designed and going to stay as is. With you being allowed to ask questions.”

The young man says he only asked two questions and he is being kicked off for who he is.

“I asked two questions and that’s it… [Evidently] my views in my head are incompatible with the trip. Because I am progressive and because I don’t like Netanyahu and Trump and border walls. Because I have those thoughts in my head, I can’t be here?…. What rule did I break?… This has been really stressful and honestly slightly traumatic to be screamed at and kicked off… I asked two questions, and I said I was disappointed in the way…”

The official then says: “The reason we can’t have you here is because of the agenda of an outside program that we believe you are affiliated with.”

That’s a reference to the young Jewish group IfNotNow’s efforts to disrupt Birthright trips. At that link, IfNotNow posts the latest Birthright agreement, which limits the free speech of participants.

Shira Leah says on her Facebook page: “I am devastated by Trump’s policies of family separation, detention of children, and building a wall on the U.S.-Mexico border because it goes against all of the values I was taught growing up n my Jewish community, where my mom was the Rabbi. It is unfathomable that I would be asked to stay silent when we see the same thing happening in Israel. Clearly this is a bribe, not a gift. #NoSuchThingAsAFreeTrip #NotJustAFreeTrip”

Birthright has come under great pressure from IfNotNow since last summer when nearly a dozen young Jews walked off Birthright trips, and IfNotNow encouraged more to do so, and the organization, funded by Democrat Haim Saban and Republican Sheldon Adelson among others, pushed back.

In reality, young American Jews show very little interest in Israel, and since many of them are hardcore Leftists, many also tend to have a “disturbing” sympathy for the rights of the Palestinians who are undergoing a literal genocide at the hands of the Israelis.  In fact, Israel receives far more enthusiastic support from misguided Christian Zionists than they do from secular and religious Jews in America.

Any Jew who shows sympathy for the Palestinians is considered a “self-hating Jew” or even an antisemite, and no open discussion of the plight of the Palestinians will be tolerated.  Jews can have their free trips to Israel as long as they don’t ask any uncomfortable and inconvenient questions, and any Jew who accepts the offer of dual American-Israel citizenship does so on the condition that they will not ask any questions about this obvious genocide.  After all, if you recognize the Palestinians right to exist, chances are you’re a Nazi who want to kill Jews, even if you are jewish yourself.