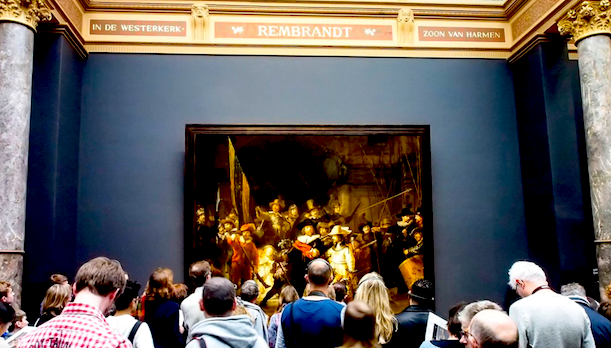 The Amsterdam Museum will stop using the term ‘Golden Age’ to describe 17th Century Dutch culture because it “whitewashes” some “negative” aspects of history not favorable to recent Third World immigrants:

According to curator Tom van der Molen, the term Golden Age is linked to national pride and “the many negative aspects of the 17th century such as poverty, war, slavery and human trafficking” are ignored, he said to NU.nl. In the 17th century the Netherlands was a world power in economic and military terms.

The announcement by the Amsterdam Museum provoked a storm of reactions. On social media, some called dropping the term Golden Age a “good idea’, but others spoke of “falsification of history” and “self-hatred”.

“I fell of my chair”, VVD parliamentarian Zohair El Yassini said to NOS. “First the street name signs had to be removed, then the stations and now the entire Golden Age. I would’ve preferred that the Amsterdam Museum explain what the Golden Age has brought our country and what the negative sides of it are. That is also the task of a museum.” According to the MP, that can be done without name changes. “We should not suddenly get Golden Age embarrassment. We will no longer know our history.”

Judikje Kiers, director of the Amsterdam Museum, acknowledged to the broadcaster that the term Golden Age can still be used well in some contexts, but it does not cover all the stories from that century. “Of course, the 17th century was the Golden Age of painting, we had incredible prosperity in that period and we had relative religious tolerance that meant a lot for Amsterdam”, Kiers said, but added: “I also think it’s important to give space to other stories.”

According to Kiers, the museum sometimes gets questions like whether everyone in Amsterdam was rich in the 17th century, and whether there weren’t any people of color also living here. “We are now trying to give substance to that, and the term 17th century fits better with that.”

The Rijksmuseum will keep using the term Golden Age for the time being, director Taco Dibbits said to NOS. “The name refers to a period in the history of great prosperity“, he said. “That does not alter the fact that we acknowledge the dark side of this. The Rijksmuseum approaches history from different perspectives. For example, we are opening an exhibition on slavery next year.”

Do museums in Third World countries go out of their way to be “inclusive” of White contributions to their history?  Of course not because museums are White concepts to begin with, and Third World cultures don’t have enough documented history and culture worth preserving to fill a broom closet.  Since there is no Third World equivalent of Dutch culture and its enormous global impact, it should now become a source of national embarrassment and shame rather than pride.

The museum can “give space” to “other voices,” but no one is going to be interested in them, least of all Third World migrants, who thought so little of their native countries that they left to live among the “racist” Dutch.  To suggest that the Dutch people had a “Golden Age” without the “help” and “contributions” of people of color would suggest that they don’t need “diversity” after all.