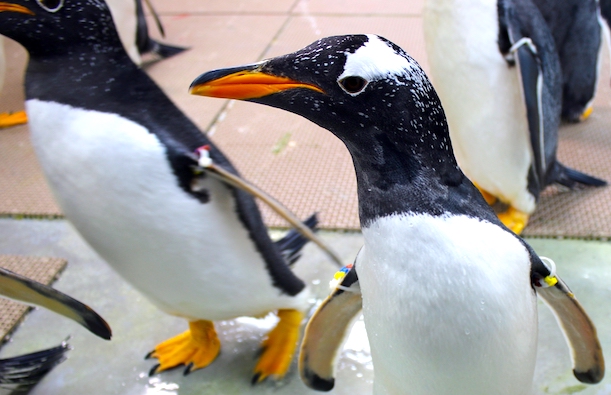 During Pride Amsterdam this coming week, Artis zoo will showcase how sexually diverse nature allegedly is with guided tours of bisexual penguins, fish that change sex, and male bird flocks that raise chicks together:

The annual Pride Lecture will also focus on this. “Different sexual preferences, alternating couples, gender changes or the lack of gender: nothing is alien to the animal, plant and microbial kingdoms”, Artis said in a press release.

According to Artis, homosexual mating and breeding behavior has already been observed in over 1,500 species of birds and mammals, including elephants, gorillas, penguins, lions and vultures. Same sex couples raising young together is common in nature, especially among bird species, where same sex couples are known to drive male-female couples from their nest and hatch the eggs together. In some cases, this even increases the chance of the chicks’ survival, according to the zoo.

It’s not only sexual preference that is very diverse in nature, gender is also very flexible in various species. Many bacteria and fungi have no gender at all, while other microbes have multiple genders at the same time. The single-cell Tetrahymena has seven different gender, with each gender being able to reproduce with any of the other six, but not with its own type. There are also species that can change their gender, such as the clown fish.

This weekend and next weekend Artis will offer guided tours along the examples of sexually diverse animals in the zoo. On Thursday, August 1st, Artis biologist Charlotte Vermeulen and former lecturer in Gay and Gender Studies Gert Hekma will give the annual Pride Lecture.

An integral part of the mental disorder more popularly known as homosexuality is extreme narcissism, which often involves projecting their own psychopathy onto the world around them, and in this case, even onto animals in a zoo.  In their drive to feel “normal”, sodomites find comfort in the idea that penguins in the Antarctic share their same proclivity for degeneracy, drug and alcohol addiction, promiscuity, and suicide.

Of course, the subtext to this agenda is to also reinforce the idea the White people are nothing more than animals, a thought which, if true, should be enough to make the suicide rate skyrocket.  How does an animal find purpose and meaning in their lives, or have a relationship with God?  In this version of reality, Jesus Christ was a zookeeper, not the Son of God, and every living thing has a soul and will have an equal place in heaven, or something like that.  If you think you’re anything higher than an ape, then you’re a “human supremacist” and probably a neo-Nazi.