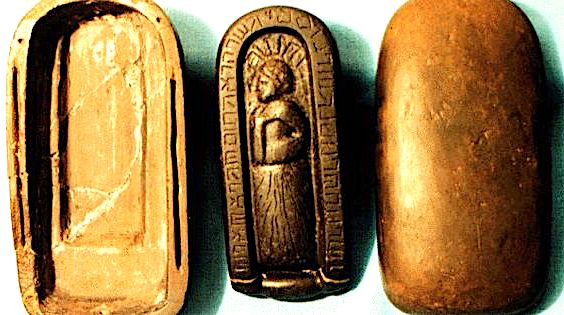 There is a mountain of suppressed, ignored, and allegedly ‘discredited’ archeological evidence that clearly demonstrates the presence of the ancient Israelites in North America dating all the way to to at least 1,000 B.C. during the reign of King David, and a stone carving of the Ten Commandments discovered in the Ohio River Valley is just one of many important examples that has been expunged from our government-sanctioned history books:

In November of 1860, David Wyrick a land surveyor in Newark, Ohio found an inscribed stone in a burial mound about 10 miles south of Newark. The stone is inscribed on all sides with a condensed version of the Ten Commandments or Decalogue, in a peculiar form of post-Exilic square Hebrew letters. The robed and bearded figure on the front is identified as Moses in letters fanning over his head.

The inscribed stone was found inside a sandstone box, smooth on the outside, and hollowed out within to exactly hold the stone….

Two years later, in 1867, David M. Johnson, a banker who co-founded the Johnson-Humrickhouse Museum, in conjunction with Dr. N. Roe Bradner, M.D., of Pennsylvania, found a fifth stone, in the same mound group south of Newark in which Wyrick had located the Decalogue. The origin of this small stone is now lost, but a lithograph, published in France, survives.

The letters on the lid and base of the Johnson-Bradner stone are in the same peculiar alphabet as the Decalogue inscription, and appear to wrap around in the same manner as on the Decalogue’s back platform. However, the lithograph is not clear enough….to attempt a transcription with any confidence. However, Dr. James Trimm, whose Ph.D. is in Semitic Languages, has recently reported that the base and lid contain fragments of the Decalogue text.

The independent discovery, in a related context, by reputable citizens, of a third stone bearing the same unique characters as the Decalogue stone, strongly confirms the authenticity and context of the Decalogue Stone, as well as Wyrick’s reliability.

In his book, The Lost Ten Tribes Of Israel….Found, author Steven Collins explains the significance of the ‘Decalogue Tablet’:

This ‘Decalogue Tablet’ was found as grave goods buried with a body in an earthen mound. That a portable tablet with the Ten Commandments in ancient Hebrew was found in a grave indicates that the person buried in the mound may have been an ancient levitical priest who was present with Israelite explorers or colonists in ancient America. It has been noted that the Hebrew inscription also has some characteristics of ‘the old Phoenician alphabets.’ While one analyst of this tablet notes, ‘the question of the tablet’s actual age is impossible to accurately ascertain at this time,’ he also added that the discovery of this tablet (and many other ancient artifacts found on American soil) means, ‘The time frame of continental exploration is suddenly retreating to 1000 B.C. or earlier.’ (p. 51)

Quoting Robert Lenhart, Collins further points out that early American settlers believed that the mounds where the ‘Decalogue Tablet’ were found were decidedly not build by the Native Indians:

“When the first settlers moved westward from the American colonies on the Atlantic Seaboard, they discovered the great burial mounds and earthworks of the Ohio Valley.  The mounds were obviously the work of man, but just as obviously, not within the capacity or tribal memories of the tribes who inhabited the valley at that time.  Presidents Thomas Jefferson, William Henry Harrison, scientists, many eminent clergymen and others speculated that the mounds and earthworks were built either by Egyptians, Norsemen, or the lost tribes of Israel.” (p. 84)