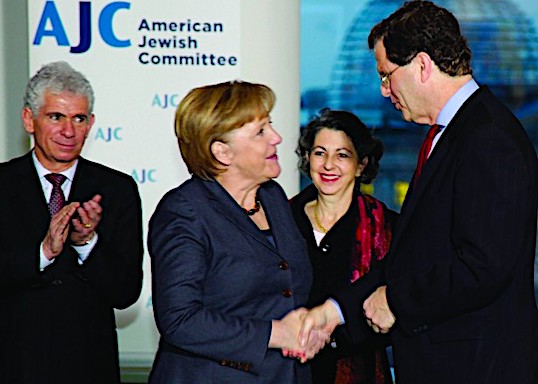 “I was deeply moved that AJC was planning to hold its Global Forum 2020 in Berlin, and, moreover, in the 75th year after the end of the Shoah – the betrayal of all civilized values. What a generous gesture of trust and ever-greater closeness,” Merkel told the worldwide audience of thousands.

The chancellor noted that “AJC was the first Jewish organization to seek contact with the recently founded Federal Republic of Germany” following the Holocaust, “the most terrible crime ever perpetrated against humanity.”

“This willingness to engage in dialogue and seek reconciliation has long since developed into a close partnership” between Germany and AJC, said Merkel. “I am exceptionally grateful to you for your tireless and diverse efforts to promote peace and interfaith understanding.”

The chancellor spoke about “the responsibility” of the German government and people to remember the Jewish victims of the Holocaust, to actively combat antisemitism, and to support Israel. “In awareness of our responsibility, we are neither able nor willing to be neutral,” she said.

“We are aware of our responsibility to remember the many millions of Jewish children, women and men who were robbed of their rights, persecuted and murdered by Germans during the Shoah,” said Merkel. “And we are also aware of our responsibility to take resolute action against antisemitism in all its forms. I see this as part of our national ethos.”

Merkel emphasized that “Jews should feel free and safe in Germany, they should be able to practice their faith and culture openly.”

Despicable acts such as the Yom Kippur attack on the synagogue in Halle last October “target the very heart of our democracy,” she said. “The government and civil society must do everything in our power to counteract such bigots.”

Turning to Germany’s close ties to Israel, Merkel declared that “standing up for Israel’s security is non-negotiable.”

No leader in the history of Germany has openly pandered to Jewish interests than Angela Merkel — which includes flooding the country with violent and anti-Christain Muslims as a personal favor to the Jews.

Of course, these Muslims — just like the ones in France — are predictably antisemitic, given Israel’s ongoing genocide in Palestine.

Then Merkel hypocritically blames White Germans for this increase in antisemitism.

And when those antisemitic Muslims attack Jews in Germany, the Jews hypocritically blame Merkel for allowing them in.

Trying to please the Jews is an impossible task for Merkel — Harry Truman bent over backward for them, and they turned around and tried to assassinate him for not moving fast enough on Israel for their liking.

And using worn out, absurd and far-fetched “Holocaust” propaganda to shame the German people into accepting this destruction of their once Christian nation may please the Jews, but it’s failing to work on young people, the majority of whom aren’t even ethnic Germans.

Merkel predictably mentions the attack in Halle where no Jews were even injured — but fails to mention that draconian laws forbidding Germans from even questioning official Holocaust absurdities may have motivated the attack that day.

And throwing 91 year old grandmothers in prison for questioning the absurdities of the official Jewish version of WWII — which even Jews themselves have begun to openly challenge — is not going to endear you to anyone with a shred of human decency.

If a Jewish-American Supreme Court Justice didn’t believe the Holocaust atrocity propaganda, why should any German be obligated to?