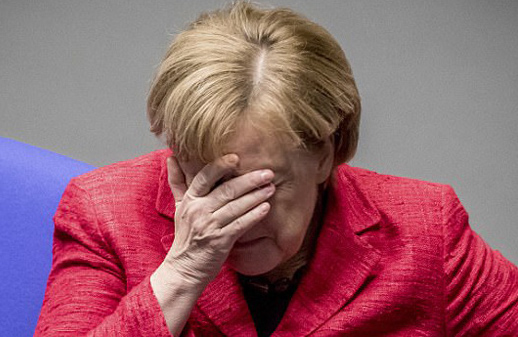 The intentionally incompetent government of Angela Merkel is now trying to reduce the number of unwanted refugees in Germany by offering them cash bribes to return to their home countries:

Angela Merkel launched the campaign last year which give migrants money toward paying their rent, with some left over for expenses.

But mysteriously, the numbers of asylum seekers applying for Merkel’s program have dropped precipitously over the past year.

But now the number has plummeted to just 14,000 towards the end of October, According to RT. To qualify, failed asylum seekers must revoke their applications and drop appeals or additional proceedings in Germany’s backlogged asylum courts.

Since it hasn’t been working, Germany’s Interior Ministry started an advertising campaign, expecting to raise the numbers of willing repatriations.

But the German liberal is unhappy with the ads, claiming they are “anti-refugee.” The remaining Germans who haven’t rejected Merkel’s disastrous open doors policy have now taken to vandalizing the billboard adverts.

Despite the program paying thousands of euros to migrants who take part in the program, the ads also promise an additional monetary gift: In addition to paying their rent, Germany will also pay for their family’s return trip to their home country.

Merkel’s oppositions have blasted the plan as a desperate attempt to cover up her failures with the open door policy.”

The latest campaign of the interior ministry looks like a sort of a winter sales, and that is cynical,” Konstantin von Notz, the deputy head of the Greens faction in the Bundestag, told Berliner Morgenpost daily.

“It is aimed at concealing [the ministry’s] own failures and improving the figures related to people, who voluntarily left the country, before the end of the year.”

Not only is the new campaign is being viewed as “anti-immigrant,” but also an indirect admission that governments multicultural stance was a complete failure.

The only problem with this deportation scheme is that it’s voluntary.  What Germany needs to do is put $100 in each refugee’s pocket and then put them on military transports back to their home countries, no bribes, no negotiations.  None of these migrants were invited except by Soros-sponsored nation-wrecking NGOs who intended to drown Germany in a brown flood of unwanted Third World radicals.  No one in Germany voted to open the borders to any and all comers.

By continuing to take in more refugees, Merkel’s government is basically ensuring that there will be a massive Right Wing reaction, which will, of course, require more draconian laws to suppress its “xenophobia” and “racism”.  As the jewish writer, Theodore Kaufman, wrote in 1941 but is still valid today, “Germany Must Perish!”  Instead of being ruthlessly fire bombed as it was in WWII, the nation-wreckers are using refugees as their new preferred weapons of mass destruction.  If this sleeping giant ever wakes up from its “de-nazified” slumber, it could get very uncomfortable for these subverters.