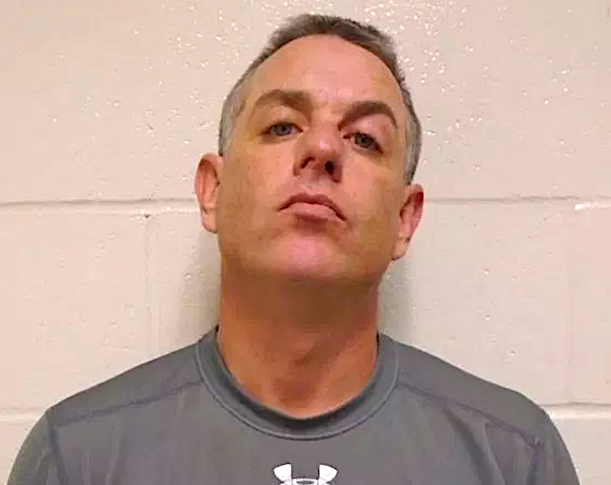 A Bossier City police officer who is already facing 40 counts of sexual abuse of animals was booked at the Bossier Parish Jail on Friday on 31 counts of pornography involving children:

Terry Yetman, 38, was arrested on warrants and booked at the jail after 8 p.m. with a bond amount of $620,000, according to the booking records Friday evening.

Yetman was scheduled for a bond reduction hearing on Tuesday, April 23, regarding his sexual abuse of animal charges, according to Bossier Parish court minutes on Thursday.

In January, a judge denied Yetman’s request for bond reduction. The bond previously set for the sexual abuse of animals charges totaled $350,000.

Yetman had been employed with the Bossier City Police Department since November 2014 and was assigned as a patrol division officer. He was placed on paid administrative leave pending the outcome of an internal investigation by BCPD, according to previous reports.

Doll Stanley, an In Defense of Animals campaign director, traveled about five hours from Mississippi to bring a document containing more than 20,000 signatures to give Marvin on Thursday, she said.

The signatures were collected in a campaign, made available in early February, through the California-based animal protection organization’s website for people to sign in favor of a strong prosecution.

“We will let Bossier County 26th District Attorney Marvin Schuyler know we are watching this case very closely and that we fully expect Yetman to be prosecuted for each of the forty counts of felony animal abuse and that no plea deals or mercy should be offered for his atrocious crimes,” the campaign description read.

Apparently, this animal rights group finds bestiality a much more grievous offense than pedophilia, which is par for the course during the current push toward the normalization of pedophilia as just another “sexual orientation”.  While animal rights groups have been involved in domestic terror activities in attempts to protect the “feelings” of vulnerable animals, no such liberal groups are willing to engage in such extreme public displays in order to protect vulnerable children.  Instead, they invite trannies to kindergartens and into childrens’ bathrooms.

But it certainly raises the obvious question: why hasn’t the LGBT community spoken out in defense of bestiality as yet another legitimate “sexual orientation”?  If the public image of pedophiles can be rehabilitated and brought into the mainstream, why not bestiality?  Besides the radicals at PETA, on what “moral” basis can the radical liberal Left cite as a legitimate reason to demonize sex with animals?  They advocate teaching in our schools that humans are merely highly evolved animals, so how can they object to a little “inter-species” affection?