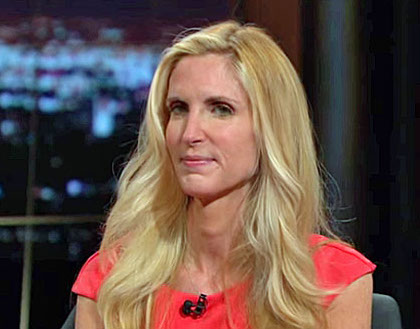 Television news pundit, Ann Coulter, has pointed out that the only issue that keeps Jews and their diverse liberal base together is hating a common perceived enemy — white men:

The right-wing talking head posited that Jews and other Democratic voting blocs like LGBT people and black women actually despise one another — but unite around an implicit shared hatred for white men.

“I mean, you have the Muslims and the Jews and the various exotic sexual groups and the black church ladies with the college queers. The only thing that keeps the Democratic base together is for them to keeping focusing on, ‘No, white men are the ones keeping you down. You must hate white men.’” she said on Laura Ingraham’s show. “It’s the one thing they have in common.”

Coulter didn’t explain how Jewish men would fit into her paradigm, since many of them consider themselves to be white men.

She went on Fox News Tuesday night to discuss the controversy within the Women’s March, in which several of the leaders are accused of anti-Semitism. Coulter herself frequently complains about Jews and holds white-nationalist views.

She, of course, is correct — when you look at democratic voters as a group, they have nothing in common, and you certainly wouldn’t expect them to vote for the same candidate.  They are all brainwashed into believing that they all have a common enemy — the authoritative White man whose sole purpose in life is to oppress and exploit historically disadvantaged people everywhere in the world.  American Blacks, for example, have nothing in common with recent Muslim immigrants from Somalia, but they vote the same way as if by magic.

And the jewish writer of this article is being rather disingenuous when she claims that some jewish men consider themselves to be White.  They do this for a couple reasons: they don’t know any better, and like a boy who thinks he’s a girl, some Jews think they are White.  Most, however, claim to be White so that they can subvert the White race from within — because to the average liberal voter, Jews “look” White enough.  When a Jew starts a sentence with “We White men…” he’s doing it for one purpose: to create universal hatred of the White man.