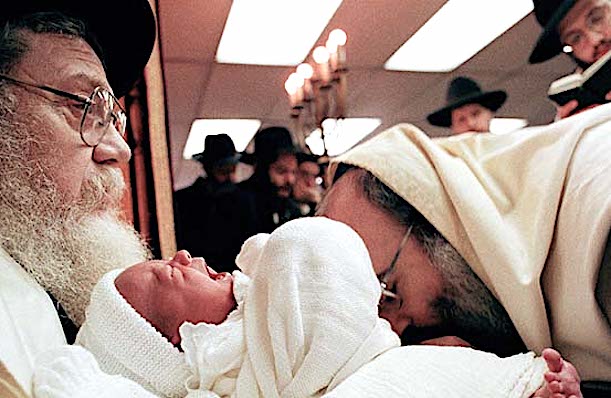 A three-week-old baby is currently in serious condition at the Bnei Zion Medical Center in Haifa due to a herpetic infection, which began in the genital area and has spread to the brain, leading to convulsions and seizures:

Laboratory tests found that the infant likely contracted the Type 1 herpes virus during his brit, directly from the mohel, who performed the ceremony using the controversial Orthodox method of blood cleaning known as “Metzitzah B’Peh,” or oral suction.

Director of Pediatrics at Bnei Zion Medical Center, Prof. Itzhak Sarugo, said that “the baby was hospitalized in serious condition, with a visible inflammation of the brain (encephalitis) accompanied by prolonged convulsions and a severe skin infection that started in the groin area where the circumcision was performed.”

The baby was rushed to Bnei Zion Hospital by his parents immediately after they noticed a large infection in the genital area following the brit.

During hospitalization in the pediatric ward, the herpes virus was discovered in both the cerebrospinal fluid and in the lesions that were on the baby’s skin.

During the first three days of hospitalization the infant suffered from numerous seizures despite receiving treatment both for seizures and the virus.

Sarugo said that “the antiviral treatment he received is aimed at destroying the virus in the brain and preventing the inflammation of the nervous system. The baby will have to receive this treatment for the next six months.”

The professor explained that “evidence of newborn herpes infections accompanied by brain infections, and their connection to the oral suction in circumcisions, have been widely described in medical history for the past 200 years.

“The herpes virus can cause a skin infection, which can spread to the brain and cause severe inflammation of the brain and even death,” Sarugo said…

The Talmud writes that a “Mohel (Circumciser) who does not suck creates a danger, and should be dismissed from practice.” Rashi, commenting on that Talmudic passage, explains that the purpose of this step is to draw some blood from deep inside the wound, to prevent danger to the baby.

The suction phase in circumcisions today is most often performed by using a small suction tube, similar to the kind found at a dentist’s office, thus avoiding the use of the mouth as recommended by the Pediatric Association and the Ministry of Health.

However, some Orthodox and Hassidic Jewish factions still use the Metzitzah B’Peh method for traditional reasons, since it is one of the four steps to fulfill the mitzvah (commandment).

So the “holy” Talmud claims that it’s “dangerous” for the child when the rabbi does NOT suck the blood off the baby’s penis, but it doesn’t tell us why it’s “dangerous”.

The Talmud is a refutation of The Torah — a subversion and total inversion of the truth — where the such “wisdom” of the rabbis replaces and supercedes the word of God.

Whenever any country in Europe has tried to outlaw this barbaric practice, the Jews cry “Antisemitism!”

This homosexualized blood ritual goes far to explain why there is a literal child rape epidemic among many Jewish communities.

This blatant disregard for the welfare of children also contributes to the Jewish obsession with pornography — especially gay pornography.

It also goes far to explain why Jews promote homosexuality and gender confusion to our children.

This mutilation and blood-letting of their own children shows a proclivity toward occult violence — including the Jewish ritual murder of Christian children.

The Bolshevik Jews murdered Czar Nicholas II and his entire family as part of a Jewish ritual sacrifice, according to mainstream Jewish-owned news sources.

It also confirms the age-old adage that “War is the Jews’ harvest.”

And yet these Babylonian occultists claim, with a straight face, that they are “God’s chosen people”.

When will this charade end?