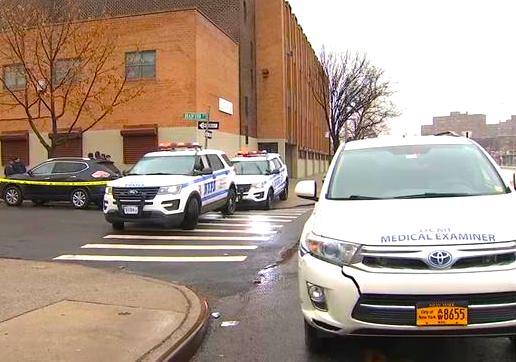 Investigators are looking into the shocking discovery of a fetus on a Brookly sidewalk this morning:

Police say a bundle of bloody clothes was discovered around 7 a.m. on Bradford Street near the intersection of Linden Boulevard in East New York.

Officials say a 20-week-old fetus was in the bundle.

“It’s sad, very sad. I don’t know, it’s crazy because stuff like this doesn’t happen around here. And like I said before, I don’t want to judge nobody, but I hope they get help, whoever it is, and they find out what happened,” said one person near the scene.

The fetus was found across the street from Gershwin Junior High School, which is closed this week for the Presidents Day holiday.

One might think that this is a rare crime, but according to one retired NYPD officer who worked in East New York, this “happens all the time.”  Imagine that, in Black crime-ridden neighborhoods, fetuses are routinely abandoned in the garbage, but it rarely gets reported because it doesn’t fit the egalitarian agenda.  And when it does happen, it’s explained away, as this police officer does, as being caused by “poverty” and “drug addiction”.

We are told that whatever social problems there are in Black communities are caused by factors that are often blamed on Whites, such as the “legacy of slavery,” whatever that means.  Slavery was such an evil institution in America that 150 years after it was abolished, it is still causing Black women to abort their own children and throw the fetuses away on the nearest sidewalk.

Are there any failings within Black communities that Blacks are entirely responsible for?  If you answer “yes”, then you’re probably a racist.