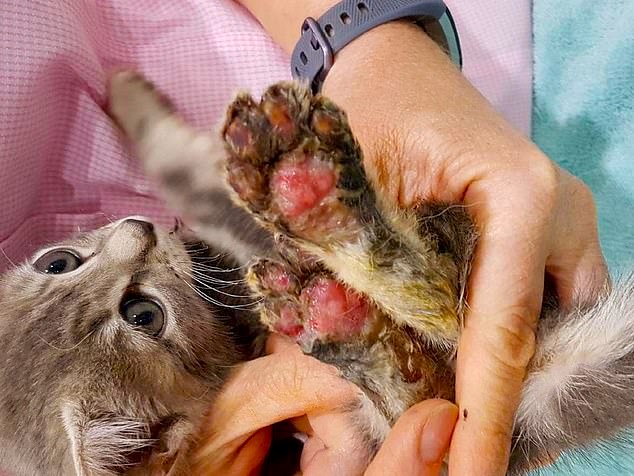 Zhang cornered the kitten, named Cinders, after finding her in his backyard with her mother, The Courier Mail reported.

The deranged 20-year-old then locked Cinders inside a hot oven, before ripping its teeth from its head and cutting its claws off in a prolonged attack.

His roommate arrived home to find Zhang attempting to drown Cinders in the bath, but was able to stop him.

After calling police, his roommate rushed Cinders to the Toowong Family Vet, where she was given lifer saving treatment.

Zhang’s lawyer argued that seeing the kitten and her mother had reminded him of his fears of being excluded and rejected by his roommates and peers.

His lawyer argued that the feeling of rejection was a contributing factor in Zhang torturing the defenseless animal.

Cinders is still on the road to recovery, but has already found a loving new family who have renamed her Clare.

Nurse Tahlia Woodlock from Toowong Family Vet said despite finding a loving new home, the kitten would suffer from lifelong health issues because of the extreme trauma she suffered.

This Chinese student/migrant is allegedly among “the best of the best” immigrants — a highly skilled engineering student, not an unskilled welfare cheat like most of them.  Whether he’s a student or a fruit picker, he’s still a migrant parasiting off a White host nation, and the way he shows his gratitude is typical of many Third Worlders — he tortures a small, defenseless animal.  And many of the ones who aren’t torturing animals are raping, robbing, and killing their generous White hosts.

Chinese people eat cats and dogs, so they obviously would not have a problem with a few amusing torture sessions before the meal begins.  Those enlightened Chinese have government-mandated abortion, but for some reason, we think they share enough of the “same values” as us that we can live peacefully, side by side with them in the same country.

Eating and breathing are not “shared values”, but that’s about all the Chinese have in common with White people.