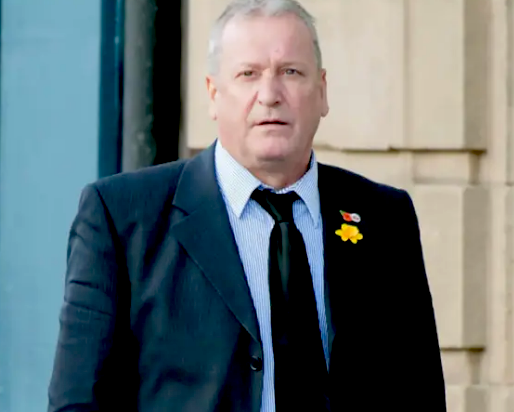 William ‘Billy’ Charlton, who organized a rally against Muslim rape gangs in Sunderland, has been charged with ‘stirring up racial hatred’ by Police:

He spoke at rallies along with Tommy Robinson and described “immigrants” as “rapists”, “animals” and “monsters”, a court heard.

The Sunderland resident was angry about rapes being committed by migrants in the city.

A source told Politicalite: “They’re trying to do him for “hate speech” he’s facing up to 7 years, but it’s transpired this week while he was on trial, another trial has run concurrently in the same building.”

Charlton allegedly tweeted about the trial of Migrants on Thursday night, and now Police have remanded him in custody for the duration of his trial.

Mr Charlton, 53, of Seaham, County Durham, told one gathering it was “up to us to fight” to “defend the people of Sunderland.”

A local grandmother was also arrested alongside him for “nothing more than filming his speeches” according to a source close to the case.

Catherine Haley, who is battling Bowel cancer and runs a YouTube channel exclusively spoke to Politicalite.

She said: “The Police came to my door, and said, “Catherine, we’re arresting you for distributing racial hatred.”

Catherine, 60 was questioned by Police, she said they asked her if she was a ‘racist’ and questioned her about connections to activist Tommy Robinson.

Billy Charleton will soon find out that the truth is no defense — and he will also find that it isn’t necessary for the State to prove that anything he said actually harmed anyone.

The idea that what he said hypothetically might have harmed someone somewhere is enough to throw him in prison with actual Muslim rapists for the next seven years.

Charleton has committed “wrong think,” which is actually worse than rape itself — after all, rape victims eventually “get over it,” but a Muslim rapist who has had his feelings hurt lasts forever.

It is remarkable to think that just over 100 years ago, the sun never set on the British Empire, and now the average British White man can’t even defend his own daughter when she’s gang raped by Muslims who were invited into England and given carte blanche with open-ended welfare and an armed police force to defend their “human rights” to take over the country.

This nightmare is far worse than whatever George Orwell imagined — because at least Orwell naively imagined a dystopian England of the future to still be White.