Anti-Defamation League Makes It Official: ‘Hitler Wasn’t Right About Anything’ 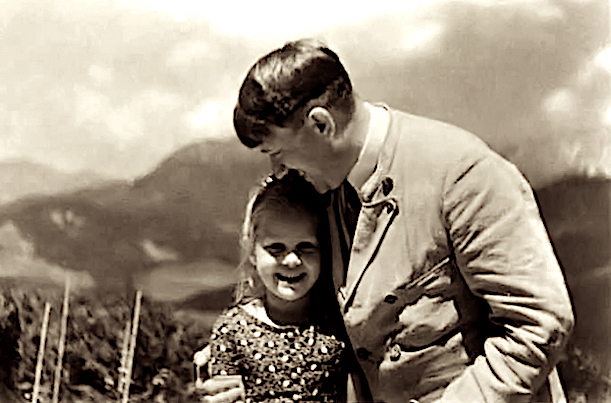 The self-appointed Hall Monitors Of America™ — the notorious Anti-Defamation League — has taken predictable exception to comments made by Mary Miller, a newly-elected Republican representative from Illinois, who told a crowd of Trump supporters recently that “Hitler was right on one thing”:

Miller was speaking Tuesday in Washington, D.C., to a crowd of Donald Trump supporters, according to Margot McGowan Staebler, a law student at Michigan State University who posted the video on Twitter. Supporters of the president, including a range of extremist figures and groups, have gathered in the capital for a mass rally to protest the election results as Congress meets to ratify them.

Speaking in view of the Capitol building, Miller was discussing her emphasis on family values and the importance of convincing voters to elect Republicans when she invoked Adolf Hitler.

“Hitler was right on one thing: He said, whoever has the youth has the future,” Miller said. “Fill your children’s minds with what is true and right and noble, and then they can overcome evil with good because they can actually discern between what is evil and what is good.”

“Hitler wasn’t right on anything – and invoking his name in this or any other context is wildly offensive & disrespects the millions who perished due to the Nazis’ hateful, genocidal regime,” he wrote. “An apology is the least you can do for your constituents & our country.”

The ADL isn’t merely a Jewish advocacy group — it’s actively involved in domestic spying and espionage, according to former California Senator, Jack B. Tenney’s exposé, The Anti-Defamation League And The Fight To Save America:

The CIA and FBI are tinker-toys compared to the ADL. We are beginning to understand something of the magnitude of the ADL’s operations.  We are beginning to appreciate the vast spy network sprawling over the nation and throughout the world.  Our imagination is staggered by its apparent control of the avenues of communication.  Their secret agents spy upon American citizens.  Extensive files and dossiers are compiled on those with whom they disagree.  Through their multitudinous controls of the media of communication, they are capable of destroying reputations and silencing all rebuttal.

With over $90 million in assets, the Anti-Defamation League has become enormously wealthy and powerful by pretending to be “wildly offended” about even the most innocuous comments made by anyone, anywhere, public or private.

In fact, David Suissa, who heads a Jewish publishing house, freely admitted that harping about “antisemitism” has literally become “money in the bank” for many Jewish activists — the monetization of hate.

And Jewish supremacist groups like the ADL have cynically attempted to take full ownership of Adolf Hitler™, The Nazis™, the so-called Holocaust™, along with its alleged 6 Million™ victims.

Only Jewish-certified historians can be “trusted” sources for what really happened in World War II, and only Jewish “eyewitnesses” can be heard — and never questioned — as to what allegedly happened in the German transit and work camps.

And laws have been enacted to prosecute anyone who attempts to factually debate the official Jewish Version™ of World War II — and if found guilty of disagreeing with that unassailable Jewish Version™, a prison term awaits.

If we are to believe the ADL, Adolf Hitler accomplished something remarkable that no other human being could ever hope to replicate — he lied about everything — literally nothing he ever uttered was the truth — whether it was the time of day, the weather, and certainly nothing to do with organized Jewry — and their self-admitted plans for world domination.

Luckily, we don’t have to listen to “pathological liars” like Adolf Hitler™ to find out the “real” truth about World War II.  We have the following “trusted” Jewish authorities who are “beyond reproach” — to tell us why the war was fought:

“The Jews are the aristocrats of the world. Our campaign is the economic boycott against all German goods, shipping and services. What we are proposing is to prosecute a purely defensive economic boycott that will undermine the Hitler regime and bring the German people to their senses by destroying their export trade on which their very existence depends.  Each of you, Jew and Gentile alike must refuse to deal with any merchant or shopkeeper who sells any German-made goods or who patrionizes German ships or shipping.
—Samuel Untermyer, prominent Jewish attorney and Zionist

“The fight against Germany has now been waged for months by every Jewish community, on every continent, in all labour unions and by every single Jew in the world.  There are reasons for the assumption that our share of this fight is of general importance.  We shall start a spiritual and material war of the whole world against Germany.  Germany is striving to become once again a great nation and to recover her lost territories as well as her colonies.  But our Jewish interests call for the complete destruction of Germany.  Collectively and individually, the German nation is a threat to us Jews.”
—Vladimir Jabotinsky, Jewish Zionist Leader, 1934

“We are not denying and we are not afraid to confess, this war [WWII] is our war and that it is waged for the liberation of Jewry.  Stronger than all fronts together is our front, that of Jewry.  We are not only giving this war our financial support on which the entire war production is based.  We are not only providing our full propaganda power which is the moral energy that keeps this war going.  The guarantee of victory is predominantly based on weakening the enemy forces, on destroying them within their own country, within the resistance.  And we are the Trojan horse in the enemy’s fortress. Thousands of Jews living in Europe constitute the principal factor in the destruction of our enemy.  There, our front is a fact and the most valuable aid for victory.”
—Chaim Weizmann, President of World Jewish Congress, 1942

“Our race is the master race. We are divine gods on this planet. We are as different from the inferior races as they are from insects.  In fact, compared to our race, other races are beasts and animals, cattle at best.  Other races are considered as human excrement.  Our destiny is to rule over the inferior races.  Our earthly kingdom will be ruled by our leader with a rod of iron.  The masses will lick our feet, and serve us as slaves.”
—Menachem Begin, Israeli Prime Minister, excerpt from LEHI (terrorist Stern Gang) training pamphlet, circa 1946

“There is a probability that a lie of massive proportions is being peddled big-time and savagely enforced….[It] is being used to oppress pretty much all of humankind…. The Holocaust oppresses the entire non-Jewish world and indeed much of the Jewish world as well.  Stand and have done with it.  Deny the Holocaust.”
—Paul Eisen, Jewish author of My Life As A Holocaust Denier, January 2008