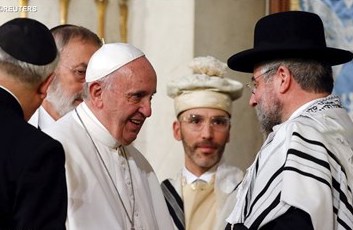 When Attilio Fontana, who is running for the governorship of prosperous Lombardy region of Italy, advocated for clamping down on immigrants’ numbers to preserve “our white race,” the Jews in Rome had a fit:

On Monday, Salvini defended Fontana and said his party in government will “regulate every Islamic presence in the country.”

“Our culture, society, traditions, way of live are at risk,” he said. “An invasion is underway.”

Under Salvini’s leadership, the League has whipped up anti-migrant sentiment, blasting Italy’s hosting of hundreds of thousands of migrants and asylum-seekers, many of whom were rescued at sea from smugglers’ boats.

“It’s inconceivable that in 2018 one must repeat to ignorant ones that there doesn’t exist a white race to defend, 80 years after the promulgation of the racial laws,” Ruth Dureghello, president of Rome’s Jewish community, said in a tweet.

Jews are a small minority in Italy, which is largely Roman Catholic.

Fontana’s center-left opponent, Giorgio Gori, countered that his own campaign is “without hysterics and demagoguery.”

The leader of Gori’s Democratic Party and former premier, Matteo Renzi, said that with Gori, the center-left chooses to “speak about innovation and human capital” over “‘white race’ and invasions.”

There you have it —  the Jew Dureghello claiming that anti-migrant remarks are essentially “antisemitic”.  On top of that, she is also admitting that from the perspective of a Jew to defend the White race is also “antisemitic”.  But when this treacherous subversive makes these clearly anti-White and anti-Christian remarks, she isn’t investigated for “hate crimes”.  Somehow the Jews in Italy have framed the immigration argument to be about Nazis and Fascists rising from their graves, and no one has the political courage to even call this agitator out on her hypocrisy.

Italy, like all countries in western Europe, has an immigrant problem because they have a jewish problem.

It is the Jews in Italy and their EU supporters who are the loudest advocates for unrestricted immigration.  But then when these mostly Muslim immigrants start attacking Jews, the Jews turn around and accuse the Whites of “antisemitism”.  And the public continues to fall for this duplicity and hypocrisy.  The Italians have kicked the Jews out of their country and states a number of times in the past for far less subversive activities.  Perhaps it’s time for them to dust off their history books and take a page out of them.