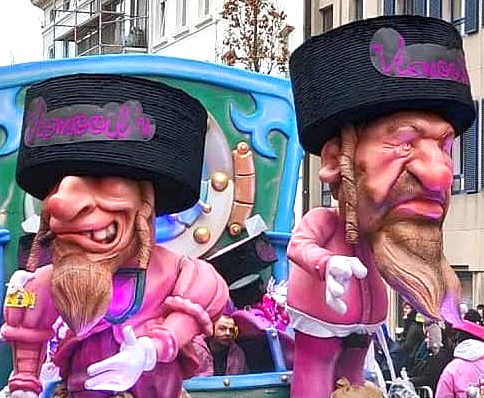 The mayor of the Belgian city whose annual parade featured puppets of Jews and a rat atop money bags has defended the display, telling local media that “In Aalst it should be allowed”:

Mayor Christoph D’Haese defended Sunday’s float at the Aalst carnival from passionate condemnations by Jewish groups and disapproval by international organizations, including the European Commission.

“It is unthinkable that such imagery is being paraded on European streets, 70 years after the Holocaust,” a spokesperson from the Commission, which is the executive branch of the European Union, told reporters on Tuesday, according to Het Laatste Nieuws newspaper.

Also Tuesday, B’nai B’rith International issued a statement saying the organization is “is disgusted with the anti-Semitic puppets” that were on display Sunday. The Simon Wiesenthal Center’s director for international relations, Shimon Samuels, wrote to a Belgian cabinet minister a letter stating that his group is “sickened” by the display.

But Mayor D’Haese told Het Laatste Nieuws on Monday that “it’s not up to the mayor to forbid” such displays, and that “the carnival participants had no sinister intentions.”

The float in question is titled “Shabbat Year” and was prepared by the Vismooil’n carnival group. It featured two giant puppets with sidelocks and streimels, hats worn by some Orthodox Jews on Shabbat and Jewish festivals, in pink suits. One is grinning while smoking a cigar. That puppet has a white rat on his right shoulder. Both puppets are standing on gold coins and have money bags at their feet.

On a wheeled platform directly behind the float were several dozen people dressed like the puppets, dancing to a song about full coffers that are “Jewishly beautiful” and about “getting extra fat.”

The annual carnival where the display appeared was added in 2010 to the Representative List of the Intangible Cultural Heritage of Humanity of the United Nations Educational, Scientific and Cultural Organization, or UNESCO. The organization has not replied to numerous critical questions about the Aalst event on social media and on Tuesday had not issued any statement on the subject.

The group Vismooil’n created the display as their 2019 theme for the Aalst carnival, the local edition of celebrations that take place throughout parts of Europe and Latin America annually in anticipation of Lent, the 40-day period before Easter. Participants prepare floats and dance routines, parading them through town on Carnaval.

In 2013, a different group designed for the Aalst carnival a float resembling a Nazi railway wagon used to transport Jews to death camps.

The people who designed the float, known as the FTP Group, marched near the float dressed as Nazi SS officers and ultra-Orthodox Jews. A poster on the wagon showed Flemish Belgian politicians dressed as Nazis and holding canisters labeled as containing Zyklon B, the poison used by the Nazis to exterminate Jews in gas chambers in the Holocaust. UNESCO condemned that display.

These types of caricatures of Jews often go back hundreds of years in Europe, and they are meant to celebrate and poke fun at Jews who live among the White Christian nations.  This type of cartoonish humor is also very common in Poland where Jews have been a significant part of the folklore going back 1,000 years, and in no way have Jews in Poland taken it to be “genocidal”.  And if Jews truly believed this float to be inciting “hate”, it would have been completely squashed.

Belgium is one of the most liberal, judaized countries in western Europe, and it’s inconceivable that there are any Belgians who want to round up all the Jews and put them in gas chambers.  If any of the goyim have embraced the jewish agenda, it’s the Belgians, who are the poster children of liberal right-think.  And the Jews needs to stop worrying about imminent genocides and just let the goyim have some fun, even if it’s at the expense of the Jews.