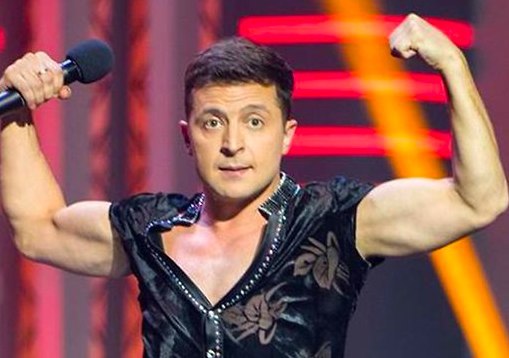 (Jewish Telegraphic Agency)  If official exit polls from its presidential elections are to be believed, the Ukraine is set to become the only one in the world besides Israel whose president and prime minister are both Jewish:

Comedian Volodymyr Zelensky’s dramatic lead in exit polls Sunday — in many of them he received more than 73 percent of the vote — was so overwhelming that it prompted a concession of defeat by incumbent Petro Poroshenko even before the official results were in, Radio Liberty reported.

If Zelensky is sworn in as president, his prime minister — at least for a while and possibly until the parliamentary elections scheduled to take place sometime later this year — will be Volodymyr Groysman, a Jewish politician who was the mayor of the city of Vinnytsia.

To some of Proshenko’s critics, the landslide success of the vague campaign by the politically inexperienced Zelensky was not surprising in light of widespread resentment over the persistence of corruption under Poroshenko, who was elected in 2014 on a platform that vowed remedial action on exactly that front.

More unusual to some, however, was how Zelensky appears to have won the elections so decisively in spite of how his Jewish ancestry – his mother, Rima, is Jewish and he has jokingly referred to this during the campaign — is well known in Ukraine.

After all, Russia and other critics claim Ukrainian society has a serious anti-Semitism problem and legacy.

“Imagine, a pure-blooded Jew with the appearance of a Sholom Aleichem protagonist wins by a landslide in a country where the glorification of Nazi criminals is enacted into law,” wrote Avigdor Eskin, a Russian-Israeli columnist, in an analysis published earlier this month by the Regnum news agency.

Eskin in the column on Zelensky downplayed allegations of widespread anti-Semitism in Ukraine, attributing much of the attention to the problem in media and beyond to propaganda by Russia, which is involved in an armed conflict over territory with Ukraine.

But Eskin’s statement about Ukrainian laws glorifying Nazi criminals is not inaccurate, and Russia is not alone in criticizing Ukraine over this and other issues connected to anti-Semitism.

Last year, Israel’s government singled out Ukraine as a regional trouble spot in the Israeli government’s annual report on anti-Semitism.

The so-called “antisemitic” right wing in the Ukraine was infiltrated and steered by Jews many years ago, and the so-called “rise” in antisemitism there is no different from anywhere else in Europe that Jews are trying to control.

Jews benefit from antisemitism, which is why they foment it and over-report it.

No one has sympathy for an “antisemite” — which is why anyone who opposes their liberal agenda is smeared as a “Jew hater” and a “neo-Nazi”.

With this new Jewish stranglehold on power at the top in the Ukraine, the country can now more effectively be used to foment conflict between Russia and western Europe.

Last year when the Jewish press announced that a Jewish comedian was running for president in the Ukraine, it was virtually assured that he would win, despite overwhelming ‘antisemitic’ odds.

Don’t ask for a recount for this election: the results were determined before the first vote was cast.